Mary used to support pit bull rescue. However, when her husband was attacked by the neighbor's new rescue pittie in the condo building's elevator, a couple of thoughts bubbled to her consciousness. She realized that even the firm conviction that "its the owner not the pit bull" could not keep her husband from getting attacked by one.


Mary is miffed that the frankenmauler is still listed by BETH GRUFF as a success story on her IT'S THE PITS RESCUE's adopted page. 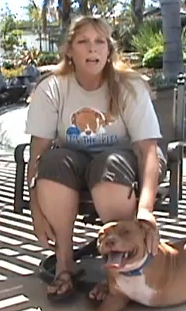 BETH GRUFF is a firm supporter of rehabilitating fighting dogs. She has confidence that "experienced handlers" like herself can "gauge the dog's mental condition." She's proud to report that 200 ex-fighting dogs from the largest dogfighting bust in history have been placed in homes and may be in a yard or elevator near you. 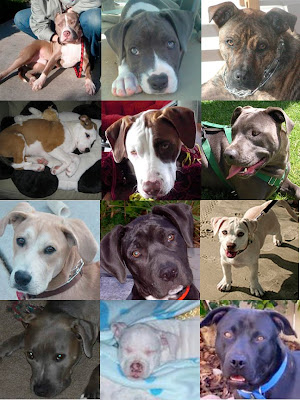 BETH GRUFF should have consulted with DR. BONNIE BEAVER acclaimed animal behaviorist and former president of the AVMA who is against BSL and who condemned the recent San Antonio hospital study by saying, "Blah, blah, blah, blah, blah." She previously has said that temperament testing is, well, basically useless and discourages veterinarians from supplying temperament assessments for insurance purposes because of the potential for liability claims. (thanks, vintage for finding this fantastic source. It should be used whenever possible)

Thank you DubV for this take on the "which end of the leash should I blame?" quandary.


The blame game is used by pit bull owners to their advantage, and that is why I choose not to play it. If we do not accept dogs as moral agents, then they are never to blame. Therefore their breed is not to blame. However, their breed is often a cause and contributing factor to maulings. That is a conversation the pit bull owners do not want to have because it frames the issue in a way where they do not have a rhetorical advantage automatically.- dubv June 23, 2011 9:44PM

This is an interesting expose - it's always great fun when a former nutter wakes up! Keep em coming Craven!

i can't take the credit.
this is snack sized dog's expose and a darn good one.

Renowned Animal Behaviorist Bonnie Beaver chimes in when she was in a position of financial responsibility at the AVMA. Since AVMA offers insurance that indemnifies vets, she warns them not to temperment test:

The AVMA warns veterinarians to be careful about supplying behavioural evaluations of dogs for insurance purposes.

"It's risky for veterinarians," said Dr. Beaver, explaining that there are many situations in which a dog may behave aggressively, and temperament tests can't rule out the possibility of aggression. "You don't have temperament tests that can identify all possibilities."

thank you vintage. experts have been updated.


"Dog bites are recognized as a public health threat by the national Centers for Disease Control and Prevention, the AVMA, and physicians' associations."

I'm sure there's some deception there. I'll bet the AVMA loves pit bull attacks since they ensure a steady stream of small furry victims to be patched up, or euthanized - which means a better bottom line. Follow the money!

let's not forget the beav's previous EXPERT opinion stated in court UNDER OATH.

By its origin, a pit bull is a fighting dog that takes very little stimulous to initiate aggression, and it will continue to fight regardless of what happens.

Pit bulldogs have been responsible for about 70 percent of the deaths of humans killed by dogs since 1979.

this find is also credited to vintage.

there is an interesting conversation starting at Find The Pit Bull.

Thank you craven! And thanks for the link to The Beav's previous expert testimony! This one is a piece of work and its nice that vintage is not letting anything get by!

Ever see those novelty cards that show how dogs and their pwners look alike?

I think you guys are onto something when you suggest testing the temperament of pit owners. We've seen them defend their dogs even after it has just attacked two dozen show animals, or attacked a human in an elevator. This characteristic is as game as a fighting dog.

Are any of these yours?
http://www.opposingviews.com/i/pit-bull-attacks-baby-3rd-attack-in-san-diego-in-1-week

That find the pit bull site is interesting. The funny thing about that little test is, even though I think it was intended to be misleading, I was correct in identifying the pit bull on my first try.

Pit bull fanatics love to blame pit bull owners when things go bad. However, they usually assume it's gang members or other violent criminals that cause all the pit bull problems. I think that's only part of the story. A pit bull can also be a huge problem in the hands of these naive rescuers who believe all the nonsense about pit bulls being "nanny dogs" and having the most stable temperaments of all dog breeds. The latter lie is usually backed up with those ATTS stats that actually prove nothing about pit bull temperament.

I think pit bulls are a hazard with these naive people since they don't want to accept that they own a dog that was bred to violently kill other dogs. These are the idiots who take pit bulls to dog parks, pet stores and other crowded areas and figure that nothing can go wrong.

When I first took the test two years ago I was able to find the pit bull on the second try. I think my knowledge in many dog breeds helped me not get it wrong. The breed I confused the pit bull with was the Alpha Blue Bulldog.

The first dog on the third row looks almost exactly like the "labrador" Buttercup that was posted on the ASPCA, except for the looser jowls. Goes to prove once more that the only people who can't find a pit bull are the pit bull advocates.

These breed communities are supposed to regulate themselves and produce reasonably safe dogs. Most do a great job, mainly because the breeding standards are not controlled be felons.


It would be lower if the grading scale permitted.....

I think its the second one down in the middle column. that looks like a condo pit. And just before that age when they begin to turn.

I believe that the Alapaha Blue Blood Bulldog has some pit bull ancestry like the American Bulldog. A lot of the dogs in that test that do look similar to pit bulls actually have fighting dog blood in their ancestry.

The Presa Canario also looks somewhat like a large pit bull, but I think that where pit bulls are regulated, that breed should be too. It was also bred for dog fighting.

SnackSize, the article in Opposing Views on the San Diego attacks was written by the Editor of OV, looks like he is on our side. He loves these pit articles, brings lots of readers and I think we need to use it a lot more. It is a well read online media.

I think any dog with fighting in its heritage ought to be regulated, not just pits.

yes the alapaha blue blood bulldog and the american bulldog are mixed with APBT.

Nice photo. Ever notice that in the last year the media has gotten downright assiduous in photographing these frankenmaulers?

† nice shiny coat
† no scars
† plenty of meat on the bones
† nylon harness rather than 4 inch leather collar with industrial strength D ring for proper axle chain set up.

yep, this pit bull was NOT raised correctly!

38 Pit Bull DBRFS in California and the rash of maulings pissed me off so I wrote a song about it...

San Diego's new anthem. They can play it during the 7th inning stretch.

When I first looked, it was just a photo, now its video and an It's the Pits T shirt showed up!

Anyone know of an article that examines animal rescuer psychology? I've googled things like "animal rescue nuts" "fur mommies nuts" and many others (of course without the quotation marks), and can't find anything. I'm sure it is widely known many of these folks aren't wrapped too tight, and everything else has been written about it seems so I'm wondering why I can't find anything.

DubV: By article, do you mean a peer-reviewed study published in an academic journal? Or something less formal, such as a piece of investigative journalism? I have a few of the former which are tangentially relevant to the subject you are interested in. You could mine the lit reviews for sources and see what you find. If you're interested, post your email address and I'll send em to you.
Here is one on the net:
http://209.190.249.61/assets/library/544_s1243.pdf

That was a really fascinating study, Miss Margo. It was definitely consistent with my experiences in volunteering at an animal sanctuary. The black and white mindset, the logical fallacies and inconsistencies glossed over under the banner of "the cause", and the willingness to engage in deviant behavior (theft and falsification of documents) for the "good" of the animals. It was actually what turned me off of the animal welfare movement. Missionary zeal and radicalism have never been my cup of tea. Pit fanatics exhibit these same traits as well. It goes a long way toward explaining why they are unable to see their own inconsistencies and why they cling to the idea of no bad dogs, just bad owners.

Thanks Margo. I'm afraid if I post an email address I use often here that a nutter will intercept it. Craven will forward me the articles if you can send them that way. Thanks again!