perjury |ˈpərjərē|
noun Law
the offense of willfully telling an untruth in a court after having taken an oath or affirmation.

this is a word that the community of pit nutters is very familiar with. unlike the practice of responsibly owning pit bulls, they practice this with reckless abandon.

on july 9, the "dog" belonging to JADE JUHASZ and DANCIE MURREY jumped out of a car window and attacked a kid.

the "dog" was snatched up by JULIE LYLE after the charges were bumped from dangerous to vicious, that's when DANCIE flew into action and sounded the S.O.S. pittie is in trouble... 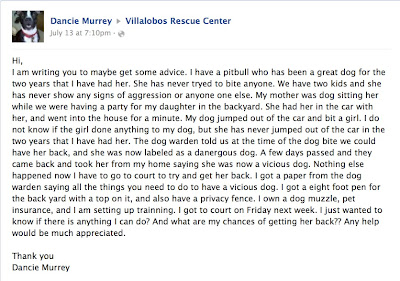 no one publicly responded to DANCIE'S plea for help.

on july 25, MURREY and JUHASZ tried to enlist the help of the toledo blade to fight the impending vicious dog designation against their now american bulldog. the comments devolve into mud slinging with JADE leaving the following:

I am the owner of this dog and all I can say is she had to be prevoked my dog would never have done this unprovovked not to mention the nieghbor was punching Cammy in the head while she had ahold of the girl I am so distraught over this I cant sleep after the bite the kids parents punched my mother in law in the eye and put guns to our heads trying to kill our dog. Cambria has not spent one single night away from us till this we are destroyed over it. and now we have to wait another two weeks to find out if we can get her back.

to which DANCIE immediately chimes in:

No No No I am the owner of the dog lol

me thinks that DANCIE might be trying to protect her felonious fiance.


on august 10, the yellow blade reported that DARCIE MURREY plead no contest for the unprovoked attack by her american bulldog.

Toledo Municipal Court Judge Michelle Wagner accepted a plea agreement in which Dancie Murrey pleaded no contest to the charge of failure to attempt to keep the dog under reasonable control, a second-degree misdemeanor that carried a maximum penalty of 90 days in jail and a $750 fine.

She sentenced Ms. Murrey, who had no prior criminal record, to a 90-day suspended jail sentence, three years probation, and a $500 fine.

aaahhh, THERE it is! DANCIE took the fall for her fiance because she has a criminal record. 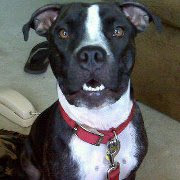 über ugly CAMBRIA, anytime you see a black american bulldog, you should immediately suspect pit or pit mix. i am not sure why these two nutters went to such lengths to hide the dog's breed since it no longer matters in ohio, UNLESS of course, they are trying to protect the "breed" by skewing the bite statistics. we all know, that pit bulls need ALL of the help they can get in that department.

JADE C JUHASZ aka JADE C McINTOSH
assaulting a teacher?! there's a reason that she is hiding her face in the yellow blade. 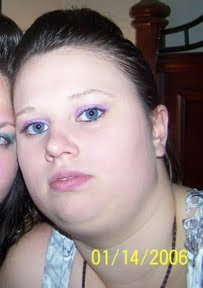 attorney PHILLIP BROWARSKY licensed in 1978 and suspended for 6 months in 1991 for removing his own traffic violation affidavit along with criminal affidavits of clients from the courthouse. these nutters AND their attorneys are predictably corrupt :)

what does the state of ohio have to say about the crime of perjury?

(B) A falsification is material, regardless of its admissibility in evidence, if it can affect the course or outcome of the proceeding. It is no defense to a charge under this section that the offender mistakenly believed a falsification to be immaterial.

(C) It is no defense to a charge under this section that the oath or affirmation was administered or taken in an irregular manner.

(D) Where contradictory statements relating to the same material fact are made by the offender under oath or affirmation and within the period of the statute of limitations for perjury, it is not necessary for the prosecution to prove which statement was false, but only that one or the other was false.

(E) No person shall be convicted of a violation of this section where proof of falsity rests solely upon contradiction by testimony of one person other than the defendant.

(F) Whoever violates this section is guilty of perjury, a felony of the third degree.


i am sick of these fuckers lying all of the time and getting away with it.
Posted by scurrilous amateur blogger at 8/12/2012

Note the change in legal representation for the August hearing. Kristi Haude appears. Ms. Haude and Jean Keating are co founders of the Ohio Coalition of Dog Advocates. http://www.toledoblade.com/local/2010/01/21/Judge-says-Toledo-s-pit-bull-law-flawed.html
BTW, the dog owner at the center of Toledo controversy was unable to keep his dogs out of trouble, even after Toledo law was changed to suit him.
http://scorchedearththepoliticsofpitb.blogspot.com/2012/05/laws-created-to-suit-dog-advocacy.html

Pit bull advocates are all the same. When we went through our ordeal, many pit bull advocates criticized my wife for opening our door to a child on Christmas. And others said "dogs fight, and just because yours lost, you shouldn't blame the pit bull."

But the funny thing is, that all people who made negative comments about my family, were always anonymous. Talk about cowardly.

The handler of the pit bull that attacked me stated to a reporter "animals will be animals" ???

Jim, I am very sorry that you had to hear that comment. Your attack was not a "dog fight" is was the mauling and killing of a small, and very loved pet, inside your own home.

Pit bull advocacy is shameful, and this is the demographic that our legislators frequently protect with lax laws. VOTE THEM OUT!!

the dog has shown its propensities to fight in pitbull fashion and it owner(S) has shown her lack of responsibility and her dis-honourable character in the aftermath of a serious attack . these dogs cannot be safely kept by dumb , careless and sleasy people .

I'm sure they are on all the pit bull sites posting pics of their "bulldog".

Pit nutters lie even when they don't have to. Just whatever is convenient at the time.

"Pit nutters lie even when they don't have to."

maybe their compulsory lying is some kind of pitter tourette syndrome.

Yeah, it really sickens me they are so proud they own a pit bull and when it comes time to pay their dues, the dog miraculously becomes a "bulldog".

looks like an ugly shit-bull to me , but who cares what kind of mutant, if it caused a bite wound requiring 21 stitches. i hope the judge would want to kill it but perhaps theres protocol that allow a second mauling , hopefull closer to home, next time.
seems like the victims family is getting more grief for their reaction to the girl being mauled , the assault and gun charges. too bad all around .....what goes around really does come around, i guess. its a scenario that has played itself in my mind too .

When the truly illiterate types leave comments on my blog, they're trying to make some sort of point, but it's obvious that they missed some pretty important classes in school. And, Miss Can't Take the Caps Lock Off, I'm looking right at you. You know who you are. You dropped a comment on my blog the other day.

Your rant would have had a much better chance of getting published if you were to discover the use of upper *and* lower case letters.

snack
the ugly truth is that many of these owners are exactly the kind of people who would want a dog bred for medieval bull ring. people are not necessarily any different than they ever were and a certain percentage would have been more at home in previous centuries.

If this isn't in maul talk, it should be. It could be shortened to pittourette syndrome, but it probably would be confusing. The involuntary spewing of lies and propaganda whenever pits are mentioned.

You're looking at this through sane mind...In the Nutter mind, they are victim!