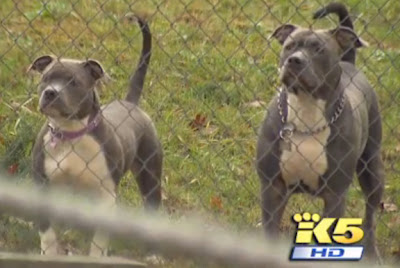 these two hideous frankenmaulers living next door to Debra Stoltenberg in Parkland, WA bulldozed their way under the fence to attack Bubbles who was peacefully minding his own business on his own porch. a witness called 911 to report the savage, unprovoked attack but failed to leave their name, which allowed PIERCE COUNTY ANIMAL CONTROL OFFICER BRIAN BOMAN to just throw up his hands and do nothing. no dangerous dog declaration. no citation. nothing. WHY? because they have "no witnesses". they do however have an admission of guilt by the worthless piece of garbage who owns the two ugly freaks of nature pictured above but that is insufficient evidence in pierce county washington. the pit nutter also escaped a $246 citation because the female ACO (a sympathetic nutter no doubt) who responded to the attack on Bubbles felt the willingness of the nutter to take responsibility was good enough for her.

“I do not believe that issuing an infraction would serve any purpose other than being purely punitive.”

PUNISH people who violate the law?
that would be downright CIVILIZED!

but wait, there's more! TWO neighbors have stepped forward to say that they witnessed the attack and called 911. Lamar Mapp and his son Ramal Mapp not only want justice for Debra and Bubbles, they are concerned about the danger these frankenmaulers pose to their neighborhood.


i am looking into the twisted psychos in charge of pierce county animal control. for those of you unfamiliar with pierce county, it is sandwiched between king county (FABB), mason county (FELON and pit bull advocate GLEN BUI) and thurston county (DIANE JESSUP). i dug a little deeper and i found MARK KUMPF, a ohio dog warden who is in bed with best friends and LEDY VANKAVAGE is also performing audits for pierce county ac. how much more fucking incestuous can this get?

residents of pierce county, you need to demand change.

I get perturbed or even angry from time to time, but after reading this... I'm pissed off. REALLY PISSED OFF!!!

If ever there was an exposé ripe for investigation and publishing by the local media, this is it!

Count that as one more pissed off person here.

this county needs to be sued again. maybe they'll get it this time. from the comments on the news tribune site:

Last year, our office sued two pit bull owners and Pierce County on behalf of a woman who had been attacked by a neighbor's pit bulls who entered her bedroom while she was sleeping. The attack lasted 20 minutes and she sustained over 30 bite wounds. There had been a total of 14 complaints against one of the dog owners prior to our client's attack, but the County had never declared the dogs potentially dangerous or tried to hold the owners accountable.

At trial, the evidence showed that County animal control officers lacked proper training and sometimes did not even know the regulations that they were supposed to enforce.

Even though the jury awarded $2.2 million against the defendants, Pierce County appealed rather than pay its share of the damages. Unfortunately, this story proves the County is still not doing its job of protecting us from dangerous animals. What will it take to get the County to change?

Animal control and animal laws are jokes that can no longer be laughed at. Most states allow at least one dog to be killed by another before anything is done (often 2 or 3). These laws were crafted in a time before dogs that were purpose-bred to kill other dogs were common in our communities. Now, as fighting breeds become more common, their advocates are becoming more common in lockstep.

Just got a wild hair to randomly google...cindy marabito....we are likely doomed as a species...even before the expanding Sun swallows our planet. It is true what the founders said about a direct democracy being not ideal, too bad a representative democracy or republic is probably as bad. We came up with a great form of government and idiots will make it unworkable within 300 years of its inception. I'm depressed, gonna go to bed and let my dog lick my face.....

A website of their "greatest" hits from various news comment threads so arranged as to totally contradict themselves and to show how often they claim pit bull attacks to be rare. If we get them calling these things rare accidents on a nearly daily basis, well.......

All I can say is no wonder more and more people are themselves simply killing roaming and/or attacking pit bulls. We just had another case where I live. I can't provide a link because the news didn't pick it up. Two streets down from me, the only reason I know about it is street gossip. Good thing: no one is mad the f--ing pit bull is dead, they all think the owner of the small dog was perfectly within his rights.

Visiting pit nutters take note. If you don't want your pit bull dead, don't let it get near anyone else or their child or dog.

P.S. I'm hoping the news didn't pick it up because it's becoming so common that it isn't news anymore. Just as attacks by pit bull aren't.

Pierce County Animal Control has a woeful record where Horses are concerned.

Go figure pit bulls get a pass, but horses confiscated by Pierce counties "rescues" get deemed "dangerous" and are euthanized.

Definitely bizzaro world.
Safer to be a pit bull in Pierce county then a horse.

Read these two stories and see how its ANIMAL UNCONTROL in Pierce County.


Since my life revolves around horses I can tell you with the hundreds upon hundreds I have dealt with and lived with I can only think of 2 in 30 years that were dangerous. So I find it impossible that Pierce County is apparently over run with dangerous horses.

Damages in a civil action are real and punitive so WTF? It's supposed to be punitive to teach people not to commit similar acts so WTF? They should also look at class action against all involved county officials for misfeasance, malfeasance and nonfeasance of office. You can force these people to conduct themselves professionally.

regarding pierce county's euthanasia of "dangerous" horses, wow. i am speechless.

As are horse owners. Which is why I when I read today's blog Pierce County was already on my radar.

It really blows the mind.

Of the two horses I have had I would qualify as dangerous one was due to a low thyroid who's temperament was "cured" with medication. Which just leaves me with one bad horse out of hundreds upon hundreds (including many dozen stallions).

I sure wish Pierce County animal Uncontrol would focus their attention on dangerous dogs instead.

I would almost hazard a guess that in recent time more horses have been put down for being dangerous in Pierce County then dogs. I bet no other County has such a record.

an anonymous commenter over at dogsbitedecatural is on the right track.
Somehow, in the course of my life, Animal Control has turned into Animal Protection.

i think this is occurring because "experts" like diane jessup and ledy vankavage have wormed their way into "training" animal control and no-kill kooks are under cutting open door municipal animal shelters and and terrorizing city/county officials.

Hear, hear! IMHO it's high time for pet owners to step up and vow to protect their beloved animal companions from pit bull attacks.

That means thinking ahead, and coming up with a plan that you can execute without hesitation, when the worst happens.

My rule going forward is to never, under any circumstances, stand by and allow a pit bull to attack my animal companion.

As a practical expression, I like Dawn's rule #1 best: "never, under any circumstances, let an attacking pit bull leave the scene alive".

As we have seen, stopping the mauler (permanently) in the act is the only chance for justice that most will ever have, and will save untold lives in future.

It took me two calls from two separate "incidents" to convince animal control to do something. I only learned the 2nd call stuck because my pit nutter neighbor started yelling at me from his side of the fence when he was fined. ;)

If pit nutters believed "it's all in how you raise them" the owner of those two frankenmaulers would be charged as if he had done the deed to the neighbor's dog himself. As if the neighbor had intentionally trained his pitbulls to kill other dogs and possibly even humans.

As we all know, even pit nutters, it's not "all in how you raise them" and the pit bull owner was never punished, an extreme disservice to the victims of PIT BULL GENETICS.

I'm wondering what the pit nutter said to the animal control pit nutters. The fact that there was a pit bull attack on the neighbor's dog and substantial damage makes me wonder what is required for pit bull owners in Pierce County to be fined. Maybe if they were another breed, so as to "show" that "all dogs bite". Fuck, the AC officer could have just fined the asshole pit bull owner and called them Weimaraners in his paperwork!

Makes me wonder how many of these "tragic accidents" never get reported.

"It's all in how you raise them" and "responsibility" are only meaningless mantras screamed by pit nutters I've always thought it was, even when it comes time to pay your pit bull fighting dog tax. Instead, the neighbor and his dog payed that tax. And now the neighbors get to see the uselessness of the Pierce Country Animal Control. Their tax dollars hard at work. I hope all the AC officers are fired for re-victimizing the pit nutter's neighbor.

So happy I don't live in Pierce County!

That audit done by Kumpf (as a moonlighting contractor) is a piece of work and a testament to the zero accountabilty performance standards in the A/C world.

They needed to spend tax payer dollars to learn that if they raised dog license compliance from the piss poor 20 percent to a mediocre goal of 57 percent, the county would bring in $659,000 annually.

This mindset in Animal Control profession needs to change.

How about "raise your license compliance rate to 80 percent or you are fired"? and PS..."Please try not to get us sued for $2.2 Million because of one of your precious Pit Bulls or you are fired".

Doesn't anyone get fired anymore?!?


*Disclaimer...You Can't Make This Stuff Up!

i only skimmed his report but a couple of other gems were his advice to increase the resolution of animal complaints on the PHONE. and of course the ever popular internet to educate and renew the licenses.

i wonder if this guy ever steps foot outside his office and away from facebook.

Moral of Story: If you want to kill someone, lure them to Pierce County, Washington, and make sure no one sees you do it! Don't worry if you leave fingerprints, or drop your driver's license in the process, as long as no one saw you, you can't be prosecuted!

At the time of the incidents, County Animal Control was done by the Humane Society

i'd be happy to. since you seem to have information that is not in the news article, let me know the name of the aco.