the execution of Ruffy

bakersfield, california
this is what Ruffy looked like when Terry and Flor Hull left. 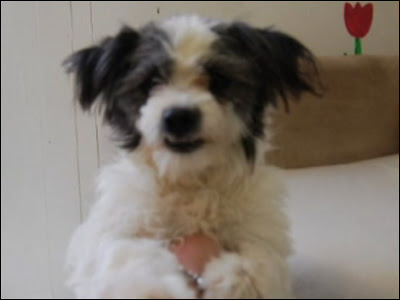 this is what Ruffy looked like when they returned. 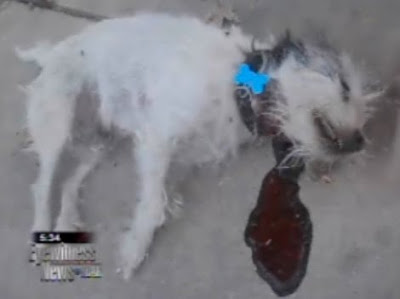 and this is why. 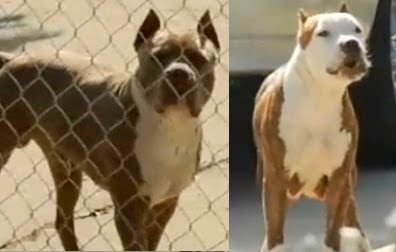 neighbor Raul Garza saw these two ugly mutants killing Ruffy and followed the dogs home. he confronted someone at the home. she denied that their dogs were involved, she said the story was fabricated and that her dogs don't get out of the yard. apparently animal control doesn't take eye witnesses accounts to murder seriously, even when the suspects have priors, so the Hulls contacted the media.
enter KBAK 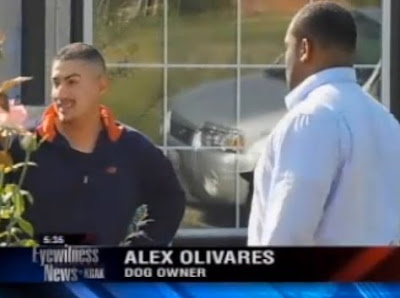 the pit nutter denies that his breeding frankenmaulers are dangerous but after Anthony Bailey's relentless questioning, ALEX OLIVERAS admits "they're not saints, they've gotten into other altercations with other dogs but they haven't gotten out of the yard." OLIVERAS also admitted that he has been cited by animal control in the past, although the nature of the citations is not yet known. 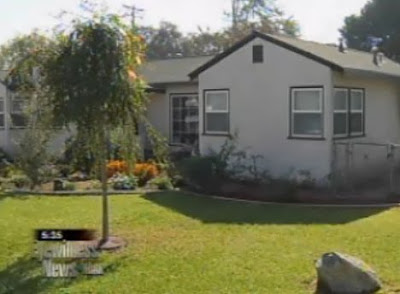 this is where OLIVERAS and his ugly killers live. it appears that the fence that contains them is 3 ft high. reporter Anthony Bailey confirms that neither the city nor the county have any fence height requirements for dogs.
Garza said that the image of the pits savaging Ruffy made him sick to his stomach and he couldn't sleep for days.
meanwhile, the pitbull muckraker always has something interesting to say about pit bulls. be sure to check in daily. recently, sniffer addressed the issue of containment, which is really the root of the pit problem. read 3 Ways to House a Pit. actually sniffer, there is a fourth... 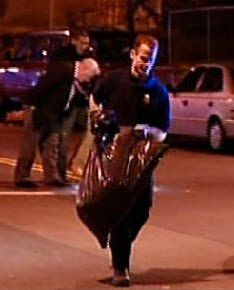 Where does this lying shitbag ALEX OLIVARES work? Surely the community wants to know. Does he work for a service company? Sales? Trades? Now that everybody knows what a piece of humane garbage this puke is, wouldn't it be helpful for the employer to know that people don't want to deal with lying scum? People don't want dishonest low lifes around their property. People don't want anything to do with filth like this in any capacity. His employer should know where the community stands - just in case he forgets to mention all this to the boss.

i wasn't able to find anything on this fucktard.

The fourth way is possibly the end all be all, Craven!

Can u say drive by?

Are they leaving us any choice?

And this bacterium is BREEDING them.

It still amazes me that these dipshits don't realize that this could all be avoided and responsible people could keep their pits if BSL were enforced....

No doubt he has a business license filed with the California Board of Equalization for his breeding side business...

Yeah, really WTF with the 3' fences?

A guy like this knows his dogs are dangerous. There is no naivete, no insanity here. Only crimnality. So WTF? Does he just not care if they get out and kill? Is he too lazy? Too FatAss lazy to build a higher fence? Or has his immunity so far made him brazen? Or is he just pit bull stupid?

I am tired of no answers. I really want to know WTF?

No doubt there is not a single one of us who will look into his breeding license ;)

How can these rescue angels think its OK to put dogs that are capable of this into neighborhoods as "pets"? What kind of sick, mentally ill person defends the continued breeding of fighting dogs?

That poor precious little dog, he didn't deserve to be tortured to death like that. I would have a very hard time not buying a gun and learning to shoot in order to do the job on those two monsters myself if that were my dog. Of course the owner who does that would probably loose everything they had because the death of the monster dogs would be taken seriously where the death of their harmless pet was considered NOTHING.

You nailed it by calling this an "execution."

No one connected to DogsBite.org understands why local, state and national humane groups are not responding to this continued bloodbath. Nor do we understand why "normal" dog owners continue to oppose breed-specific pit bull laws designed to PREVENT these horrific killings.

The continuation of the UNREAL number of family pet executions by pit bulls is disgusting. It is DISGUSTING and we are SO tired of it at DogsBite.org. It is up to pet owners to demand changes in local and state laws. It is up to pet owners and humane groups to take a stance against dogs selectively bred for the killing of domesticated pets.

This asshole keeps breeding these killers. The female looks like shes had quite a few litters so there are many more of these beasts roaming around just waiting to hit that age to start doing their damage to society.
And wth is up with the dudes fence?
A dumbass can look at the fence in the pic and tell that it CANNOT in any way, shape, or form, contain Pit Bulls.
What a douchebag!
Poor little Ruffy

I am so sick of this....who in the animal rights movement will defend the canine victims of fighting breeds? Why is there such a denial that there is a breed-specific problem?

Every other group of domestic animal breeders recognizes breed differences in temperament. Any ten year old doing 4-H can tell you. Want a rabbit that is extremely calm and easy to handle? Get a Himilayan, not a Neatherland Dwarf,which tend to be cage aggressive and less calm. Want a chicken thats calm, friendly and easily handled? Get a Buff Orphington, not a Leghorn, which tend to be skittish and flighty.

Talk to any mounted police officers lately? Why do you suppose they ride Shires and Shire crosses instead of Thoroughbreds? Its temperament, pure and simple.

Want a cat thats friendly, talkative and outgoing? Consider a Siamese, not a Maine Coon Cat, which tend to be more aloof.

This isn't rocket science, people, its been a basic tenet of animal husbandry for thousands of years. Farmers know it, it applies to all domestic animals. Selective breeding of domesticated animals has resulted in changes in temperament and behavior, as well as physical appearance and performance.

Does this mean there aren't exceptions? Of course not. My friend has a Neatherland Dwarf rabbit who is calm, friendly, and loves being handled. But this does not change the fact that the majority of dwarfs, because of the interbreeding with wild rabbits to create the breed, tend to aggressive and not easily handled.

Why anyone in their right mind would accept that the science of genetics does not apply to domestic dogs...its just how you raise them" is baffling.

I am sending this to the Humane Society, to ASPCA, I know PETA will love it and maybe they will actually do more. This has to stop. Anyone of our pets could be next, it happens everyday.

I just noticed the mutant scorecard - is that this year only?

The owner of the pit bulls knows his dogs are dangerous to other dogs and yet has them behind a three foot fence? And now, even though someone SAW them kill Ruffy, he's denying everything?

Someone that reckless and callous towards others needs to be in jail. He doesn't need to be part of society. I totally agree that Alex Olivares needs to be treated as though he were the one who killed Ruffy since he decided to keep fighting dogs and it's his fault they got away. The fact that he's breeding these dangerous dogs just adds to his list of stupid, antisocial deeds.

All the pit bull fanatics like to say that "it's not the dog, it's the owner!" yet note that NONE will step up to condemn the reckless pit bull owners whose dogs kill people and pets. Most are also ridiculously stupid when it comes to the genetic heritage of this breed as well. They were bred to kill other dogs - end of story. Anyone who continues to breed pit bulls is not someone who cares about the welfare of other dogs - or people, since people are often the targets of the pit bull's tendency to maul and kill.

sorry, i should have explained the mutant scorecard. this is he number of animal victims that i have documented on this blog since i launched in june 2009.

This is the kind of reporting that is needed. People to see what these mutants do. it is heartening to hear on the news clip that this reporter, Bailey, has been on the case of pit bulls and hopefully will continue to do so.

Is Zupf still saving these news videos, because this one NEEDS to be saved. I don't have a video camera myself, or I would.

Though the nutter's house seems modest, they seem to be house proud and doing a lot of landscaping. These people would rather plant flowers and trees than spend the money on proper containment. If a secure enclosure magically appeared in their yard tomorrow, I would still not trust these lying, heartless, spineless, irresponsible pukes to keep those dogs from getting out.

If they own that home I hope that Ruffy's owner can sue them. Take everything they have away from them.