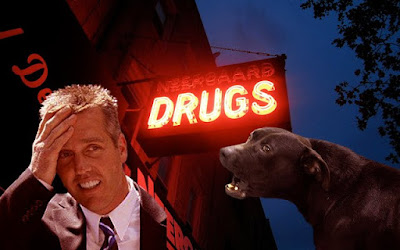 UPDATE
The judge awarded Mary Bolton $1,000,000. :-)
Catawba County, NC
A 32 yr old female letter carrier was attacked by Jeremy Mayfield's five dogs when she tried to deliver a package that was too big for his mailbox. Mayfield ran outside and grabbed the injured letter carrier and brought her in his home. The letter carrier was hospitalized with injuries to her legs, arms and shoulders. The dogs are described as pit bull lab mixes. The dogs are in quarantine and can be seen in the video in this link.
More fun facts
Mayfield failed at least two Nascar drug tests and then sued Nascar after they suspended him for violating their zero tolerance policy on substance abuse. That lawsuit was eventually thrown out. Mayfield blamed the failed drug test on a combination of OTC and RX drugs that caused him to test positive for methamphetamine. Mayfield's stepmother Lisa Mayfield accused the Nascar driver of making and using meth during the years of 1998 - 2005 with his father Terry Mayfield. Jeremy Mayfield said his stepmother is a liar and a "whore" and murdered his father in 2007. Jeremey also claims Nascar has a vendetta against him and paid his stepmother to lie. Jeremy filed a wrongful death suit against his stepmother even though his father's death was ruled a suicide. Lisa Mayfield sued Jeremy Mayfield for slander in 2009. The case was settled out of court in February 2011. The details are confidential but Jeremy "issued a signed apology to his stepmother".
links
www.wsoctv.com
hickoryrecord.com
www.foxnews.com
www.chron.com
obspapertrail.blogspot.com
deadspin.com
bleacherreport.com
sports.espn.go.com
www.wbtv.com
Posted by scurrilous amateur blogger at 5/11/2012

This dude sounds a bit paranoid.

Is he paranoid because of the enormous quantities of drugs taken, or did he take all those drugs because he is paranoid?

Or possily he is simply a classic, lying, drug abusing nutter?

Well, if this isn't the king of all nutters, he's certainly in the royal nutter family.

What you failed to mention is that Mayfield had several signs posted not to come onto his property because of dogs. Maybe if the mail carrier could read it wouldn't have happened. The dogs were protecting their property.

damn that mail carrier for doing their job!!

"damn that carrier for doing their job" Dawn, would you touch fire even if someone is warning you not to touch it because it will hurt you?

Those worthless maulers need a change in job description. What would YOU do if I shot you in both arms and both legs when you visited my home on legitimate business? Yeah, I THOUGHT so.

The 98% of us who do NOT own freak fighting dogs WAY outnumber you and WE say that any dog on human attack thats not legit self defense demands 2 things: 1) Destroy the dogs, and 2) jail the owner.

Ding Ding Ding! We have a winner!

hey anonymous, that mail carrier has a right and obligation to deliver mail. this fucktard should have gotten a post office box and put a sign up telling all delivery people to go away.

I love you dawn; quick to cut through the bullshit.

Anon, this is why it's illegal to obstruct mail delivery! And that doesn't just mean parking front of a mailbox. If this nut didnt want people on his lawn, he should've relocated an appropriate drop-box to the perimeter of his property, or, as previously mentioned, acquire a po box. Even so... What are people going to do in regards to sensitive deliveries that require confirmed contact? He had the duty of defining appropriate boundaries for the animals and a dog-free access point for mail/deliveries/firefighters/the police/etc.. The mail carrier is innocent, and was maimed because of this jackass. Period.