South African athlete and murderer at home playing with his pit bulls. 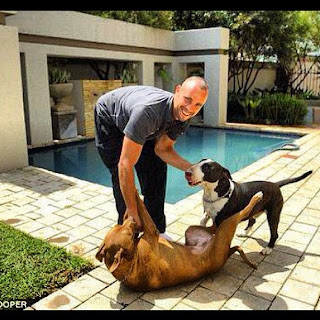 The olympian/paralympian gold/silver medal winner, Oscar Pistorius, aka The Blade Runner, was charged with premeditated murder in August for the St Valentines Day Massacre of his girlfriend Reeva Steenkamp.  More gun charges were added in November.

And the hybristophiliacs are already starting to swoon.

From a 2011 Telegraph article on the The Blade Runner:
In the off-season he lives in a house he built two years ago on a private estate on the outskirts of Pretoria. He lives alone, with three dogs – Capone, a Jack Russell terrier, Silo, an American pit bull, and Enzo, a bull terrier. Silo has chewed her way through most of the house, he says, including a couple of pairs of prosthetic legs. 'It's a madhouse, but they all love to come running with me.'

I wonder why Capone is missing from this photo. Perhaps Capone the Jack Russell started something and Silo the APBT finished it?

I am familiar with this case. The first time I read it, my blood ran cold.

That woman died a terrifying death trying to hide from this bastard in the bathroom, if memory serves.

I hate domestic abusers. I don't think there is any group of people I hate more than men who terrorize the women and children of their households.

Then you can rest easy because he has never terrorised a woman in his life! Read a little more about the facts of the case and you will sleep a deep and restful sleep!

So chartreuse, are you saying his girlfriend who tried unsuccessfully to hide from him, before he shot her,was totally unafraid? Are you really that stupid? Dumb and a nutter is no way to go through life.