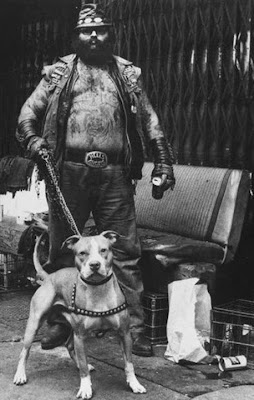 After the completion of his military service in 1966, Girolamo joined the Hell's Angels and became the sergeant-at-arms of the Manhattan chapter. He is responsible for the club's motto "When in Doubt, Knock 'em Out" and their insignia "Evil Force".

On September 21, 1977, 22 year old waitress/girlfriend Mary Ann Campbell died after Girolamo pushed her from the roof of a 6 story building. That night, the drunken Girolamo was also accused of attempting to rape two other members. Girolamo was charged with Campbell's murder but before he could stand trial, he died from an injury to his spleen after a dispute turned physical with Oakland Hell's Angel President Michael "Irish" O'Farrell.

Three Can Keep a Secret if Two are Dead

Showdown- How the Outlaws, Hells Angels and Cops Fought for Control of the Streets 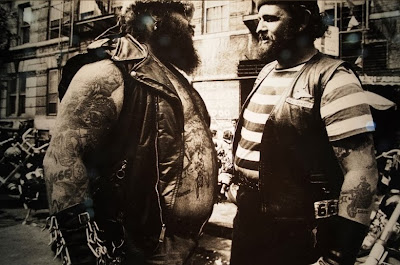 He had two pit bulls, but then he ate one. whole. That's what made him cranky.

Have you seen the 1974 episode of the TV show 'Geraldo'? Big Vinny and his young pregnant wife were interviewed as part of the show. I am trying to find out if the pregnant girl seen on show was Mary Ann Campbell?

nope. i haven't seen it.

funny i wondered the same Robert W...just did a google search! turned up nothing...was she introduced on show by Geraldo? Ill have to rewatch

No he doesn't mention her name on the show. But it was her the he threw off the rooftop actually it was more of a push. How do I know you might ask. my older brother new all of them back than. he also is no longer with us as most of those guys are gone now too..

thanks for the update

In answer to the question about the geraldo show , no it is not the same lady , Maryanne was another lady years later my uncle new

The girlfriend was pregnant on the Geraldo show. What happened to her and the baby?