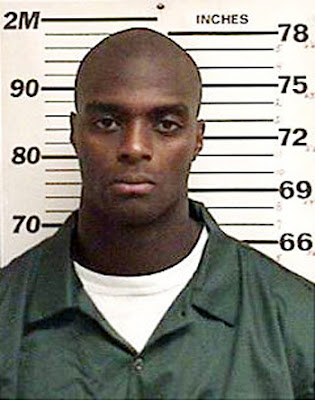 UPDATE!
Plaxico Burress is being sued, AGAIN. The Barney Fife of the NFL is in trouble this time for the damage done by his pit bulldog during a pit wilding episode. Burress' neighbor was mauled while taking a walk in her neighborhood last May. The victim claimed that "she suffered serious injuries to her head, body, and limbs and that she suffered severe pain and mental anguish" as a result of his negligence. Black Sports On Line is siding with the convicted felon, claiming this is just a money grab. 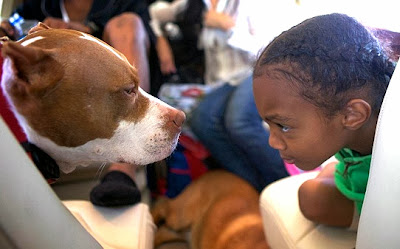 
Plaxico Burress was released from prison June 6, 2010 after serving almost 2 years for gun possession and reckless endangerment. In November 2009, the proud pit bull owner was illegally armed while clubbing in New York. When the gun started to slip, he reached for it and shot himself. Burress' home in New Jersey was searched a month later. The police found a 9mm, a rifle, ammo and the clothes he wore during his famous OOPS moment.

Plaxico Burress has been named in at least 9 civil lawsuits since he joined the NFL in 2000. My favorite was the December 2008 car accident. Burress rear ended another car with his $140,000 Mercedes Benz. Burress had no insurance, it had been canceled 3 days prior to the accident for failing to pay the premium.

There should be an IQ test before the NFL is allowed to offer huge sums of money to these idiots. The Fork Union Military Academy and Michigan State should offer refunds of any tuition paid.

Easy research on Burress reveals an individual of astonishing stupidity. He had the Glock tucked into the waistband of sweatpants. Now just how would anyone think that might be a secure place to stash an illegal handgun? He served time in prision for the criminal possession of a handgun charges. What a dope...

There would be no NFL if an IQ test were required. And another idea, banning players with violent criminal records, would also probably sink the NFL.

The ol' glock in the sweatpants gaff...
Thankfully he only managed to shoot himself. He would be laughable if he weren't so damn dangerous. He's also had 2 restraining orders placed on him after domestic disturbance calls.

Calling him a moron would be padding his IQ.

Off-topic, sorry, but was it Arsenio Hall who said black people have names like the items in a medicine cabinet? Plaxico is especially hideous, and sounds like drugstore ointment for a nasty skin condition.

You all are a bunch of haters Try helping and instead of bashing!