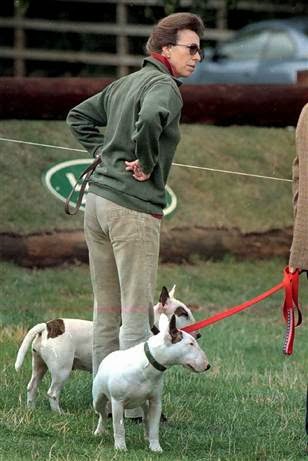 In 2001, the princess became the first senior member of the royal family to have a criminal record after she was convicted under the 1991 Dangerous Dog Act for the attack on two children in Windsor Great Park. In addition to this attack, Princess Anne's bull terriers attacked the maid, another dog at an outdoor event and one of the Queen's corgi's which resulted in the death of the royal dog. The Queen banished her daughter's bull terriers.

bull terrier and bull mastiff owners want to have us believe their ugly dogs are now bred away from their previous purposes of violence and aggression . hmmmmm. i think ugly is as ugly does .

The fact that bull terriers retain the aggression and viciousness of other bulldog breeds really should tell you everything you need to know. These traits will be bred out when bulldogs die out.

Must be nice to be the Queen and be able to ban-ish the problem, unlike the rest of us who have to live in neighborhoods with it.

My agility instructor banned a bull terrier that had been coming to one of our puppy classes. Even though a puppy it was locked and loaded on my Pomeranian from the start.

After a couple of classes I told her it was me or the other person. I still go to class. I am sure the dog was accepted somewhere else.

I think she and Teddy Roosevelt would have gotten along very well.

I am having problems finding a rental that does NOT rent to vicious breed. Ironically the people applying to rent my property that I own and previously lived at have them and flagged my advertisements for offering my home for rent because I denied them after seeing the type of dog they owned they are butter nasty bullies and need to pick another status symbol to be cool edge and against the grain a symbol that doesn't tear children's voice boxes out. Sick of it. And if that is not enough the short term rental I am currently at has a cockerspaniel and a pitbull dog the owner landlord in this 2 apartment home with 2 adjoining doors to her home connects to my home. Every time my child laughs or screams that dog unbeknownst to me at time of rental the dog snarls and growls anytime we leave or enter the property. The new apartments i seek refuge at are saying we can't deny them a place to stay (pitbulls and other aggressive dogs) we do have a 30 lb limit, and we have a person with anxiety who has one pitbull as a service dog. Wtf!!!!!!!!!!!!!!! Anyone have any ideas can I call thier property insurance and tell on them what do I do I'm surrounded by nutters you should see the nasty message I got from one property manager.