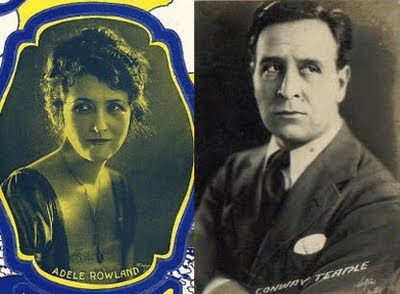 Adele Rowland
July 10, 1883 - August 8, 1971
Conway Tearle née Frederick Levy
May 17, 1878 - October 1, 1938 (heart attack)
Four year old Jacques Weinberg was walking past the Chappaqua, New York home of Hollywood's dashing leading man Conway Tearle and his actress wife, Adele Rowland when their cook called to the boy to give him an orange. The four year old was promptly greeted by their gripping dog which resulted in a trip to the Babies' Hospital in New York. Jacques' scalp was so badly torn, he was listed in critical condition. Max Weinberg fought to have the dog shot. Tearle and Rowland fought the Weinberg's demands for destruction but it is not clear if the gripping dog was eventually destroyed. The Tearles japanese cook committed hara kari and 4 years after the attack, the Weinbergs were awarded $20,000.
To my knowledge, this is the earliest documention of a pit bull scalping.
links
new york times 12.22.1921
new york times 05.12.1925
www.digitaldeliftp.com
Posted by scurrilous amateur blogger at 4/11/2011

Geez, these two look like psychopaths. This asshole wouldn't let his dog be put down to find out if it was rabid. The child that was attacked was feared to be to weak to be able to survive the rabies shots.

psychopathic pit nutters to be sure.

But, but, but... they were known as the nanny dog.

It is clear that the method for mauling children is unchanged since the 1920s.