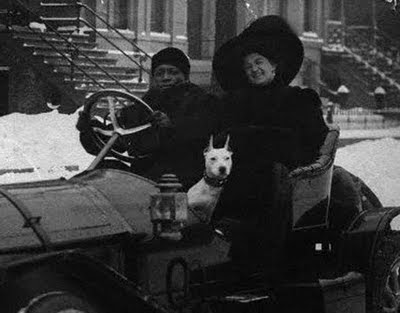 Jack Johnson, wife and gripping dog in Chicago
Jack Johnson nee John Authur Johnson
March 31, 1878 - June 10, 1946
One of Johnson's "prize bulldogs" attacked one of Johnson's fans in Detroit and "nearly chewed his arm off". "...after considerable trouble [Johnson] succeeded in releasing the dog's hold..." The victim, Sam Lewis pressed charges. The outcome is unknown.
interesting factoids
Johnson's first wife killed herself in September 1912. Johnson beat her many times during their turbulent relationship.
Three months later, he married 18 yr old prostitute, Lucille Cameron. She divorced him in 1924 citing his infidelity.
Johnson had a penchant for young white hookers. He even married one to avoid prison but later was found guilty after another prostitute testified against him. Johnson was convicted under the Mann Act and served 2 years in Leavenworth after living in exile for 7 years in Europe.
Johnson was killed in a car accident in North Carolina. Angry at being denied service in a diner, he took his aggression out on the road. Johnson was 68.
links
new york times 02.09.11
theselvedgeyard.wordpress.com
wikipedia.org/wiki/Jack_Johnson
www.dailymail.co.uk 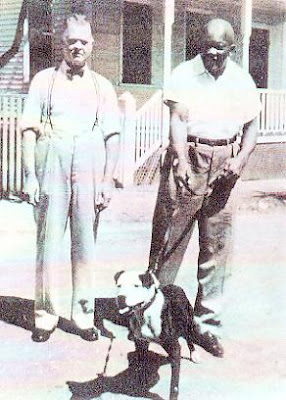 This buffoon has been held up as a victim of racism because he was uncompromising. People hated him because he was a violent woman abuser who defended his mauling pit bulls against one of his mauled fan.

It sucks that white racists weighed in to cloud the issue.

Yeah, white people made life suck for him, but he took it out on the white women who were willing to be with him and on a fan.

Sorry dude, you wanted to defiantly show us you got white women to prove something to idiot racists, but it makes me happy that you look like you're just driving miss daisy in this photo.

I've seen this guy cited as a "famous" Pit bull owner on several Pit Rescue sites...They don't even know they are celebrating man-maulers