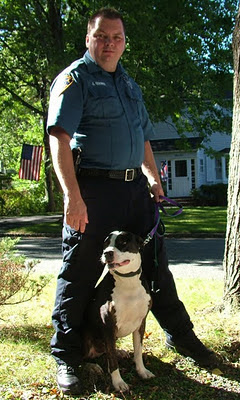 James Osorio and mutant side kick

Last month, the Gulfport, MS police department hired a Texas consultant to instruct their officers in the fine art of handling aggressive dogs. Being a pit nutter, Osorio of course promotes less lethal methods. Osorio advises cops to back away and reassess the situation. Osario believes LEO's greatest assets are "awareness and common sense".

...foremost expert, 32 years in Public Safety since 1979, trained throughout the US at Local, State and Federal levels of Law Enforcement, Animal Control, Firefighters and EMS, author, veteran, yadda, yadda yadda.

Thirty plus years in public safety, yet the Texas expert's Linkedin page doesn't specifically list his employment prior to January 2008. That's odd.

A quick google reveals that Jim Osorio was in New Jersey in late 2007. Osorio was SUSPENDED by the NJ SPCA when he ACCIDENTALLY SHOT HIMSELF IN THE FOOT WHILE CLEANING HIS 9MM INSIDE HIS CAR WHILE WORKING FREELANCE SECURITY.
Awareness and common sense applied! :-)

I'm curious, why is an "expert" of this caliber working freelance security? Could his linkedin résumé be embellished like the memoirs of fellow famous pit nutter Jame Frey?

Suspect the "weapons of less-than-lethal-force" expertise came about because they made this Barney Fife stunt double give his bullet back.

Who hires these fools to "educate" law enforcement without checking on actual credentials?

Aha! Make barney fife give his bullet back!

great reading...thanks, as the mother of a pit victim, I need blogs like yours...it helps me feel not so alone in realizing how desperate changes are needed to pit ownership...I am going to add your blog to mine...people need to see what you have to offer!!!

Who knows where I can find facts on him shooting himself

the "facts" are available in a pdf of the best friends web link that they deleted but i had already saved :-)