The Animal Farm Foundation Propaganda Machine in Action: There's no such thing as bait dogs! 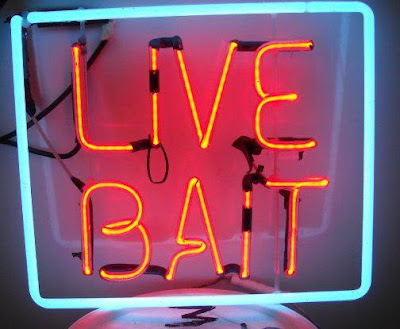 The Animal Farm Foundation has now decreed that no longer shall minions speak of "bait dogs."

Once upon a time before pit bull rescues got $18,000 for each Vick pit bull they rehabilitated, it was considered unethical to speculate that a pit bull rescue might have been a bait dog when the rescuer really had no such knowledge, because that would by lying. That ethical reason has been abandoned long ago.

And though I don't believe AFF has participated directly in promoting scarred pit bulls as bait dogs, they have been silent on the subject since it became all the rage to adopt fight bust dogs into people's homes. In the world of pit bull rescue, there were only fighting dogs and bait dogs - all pit bulls. No losers and no bait dogs of other breeds or cats either. Ergo, Any pit bull that had scars, worn teeth, no ears, and cowered when taken away from the chain set in grew up on must be the victim bait dog.

And the reason to stop calling pit bulls bait dogs is not to get back to ethics - ie not lying. No, the reasons to stop are:

1. '"bait dogs" are mostly an urban legend.'
2. "you demonize" the fighting dogs that merely have the love deep down inside to rip other dogs to shreds. (paraphrasing)

The responses start out with the propaganda gulpers saying "you've changed me through education." (seriously) One supports the claim by asserting that the HSUS created the bait dog myth in its dogfighting campaign which is what caused rampant dogfighting in the first place. 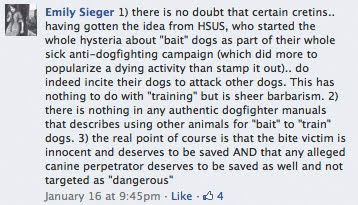 But soon people arrived who lost their shit over the fact that AFF called bait dogs an urban legend. When challenged, AFF said, read carefully, we only said only "MOSTLY an urban legend."

Have no doubt, though, the minions will fall in line and pretty soon we'll be reading all over the internet how bait dogs are an urban legend.

This is the first step in quashing the whole subject of dogfighiting so the AFF and BFAS can go on squeezing money out of fight bust dogs and adopting them out to our neighbors. Pretty soon, they will all just be victims of abuse and no one should speak the DF word which is an urban legend anyway.

AFF and Best Friends are hand holding partners in the effort to place pit bulls into any community or any home, wanted or unwanted. The pit bull advocacy machine endlessly spews "it's all in how you raise them" "bad people train them to be mean." Every pit bull with a scar is labled a "bait dog."

Ledy VanKavage headed the effort to change state law in Florida regarding seized fighting dogs. In the past the dogs would be euthanized to protect the public. These are actual game bred, pit conditioned, experienced, fighting dogs. If it's all in how you raise them, these dogs are dangerous. These are dogs bred and conditioned for an activity so violent that it is a felony in all 50 states. Per pit bul advocacy, these ARE the dangerous ones. Here is where Ledy changes sides, with the new law, HEAVILY promoted by Ledy and Best Friends, these dogs will now be individually tested and placed in the community, as family pets. "It's all in how you raise them" until it isn't.

Breed specific advocates are wrestling the wrong end of the alligator when they attempt solve the problem of shelters stuffed to the gills with pit bulls. The only way the problem can be solved is to demand neuter and spay for pit bulls. STOP producing so many unwanted dogs! We can't do this, pit bull advocates must do it.

I've been reading about this for awhile now, in various forums. Most folks scoff at being told that bait dogs are a myth while some believe it is a myth and try to prove it. Here's an example from back in July(DBO is mentioned on page four).

looks like jane screwed up. she should have slapped a couple of pit nutter focus groups together and tried out the new and improved propaganda campaign before releasing it to the public. so much unnecessary risk for someone with such deep pockets.

i loved this comment from Animal Farm Foundation:
Tashendbsl Myers, we never said "bait dogs are a myth." It's clear we're having trouble communicating through Facebook comments, so how about we speak over email? Our email address is info@animalfarmfoundation.org. Thank you.

From the US Senate FY-12 Budget Request,signed by 40 US Senators.

"Dogs bred and trained to fight endanger public safety, and some dogfighters steal pets to use as
bait for training their dogs. Also, in 2002-2003 cockfighting was linked to an outbreak of Exotic
Newcastle Disease that cost taxpayers more than $200 million to contain. Cockfighting has further been linked to the death of a number of people in Asia reportedly exposed to bird flu. Given the potential for further costly disease transmission, as well as the animal cruelty involved, we believe it is a sound
investment for the federal government to increase its efforts to combat illegal animal fighting activity."

i cant think of a lower person or thing to be getting their kicks from seeing animals torn to bits, especially pets stolen to be fed to fucking mutant killer dogs. its hard to believe anyone could be so degenerate as these dogfighters must be but then the breed stills exists. the dog and the dog fighter.

I recall debating a pit owner/dogfighting supporter online. (She refused to use the term "dogfighters"--only "dogmen.") She, too, insisted there was no such thing as bait dogs, and that pets are never, ever stolen by her wonderful dogmen to serve as bait. It's amazing how much crossover there is between the pit bull ownership world and pit bull fighting world. Hmmm...

Packhorse: "It's amazing how much crossover there is between the pit bull ownership world and pit bull fighting world. Hmmm..."

Yes, and it keeps getting better. Now AFF is promoting Craigslist as the best way to place dogs. seriously.

Look at the DNA questions...(and answers) that come up.

Carla Hubbs They talk about DNA testing. Is there one DNA testing lab that you would recommend over another for accuracy? I wanted to include that in my curriculum this term, i think it'd tie in with everything else.

No answer to that.

But this comes farther down:

Karen Stout With regards to the DNA testing, I question how accurate these test are. I was very tempted to get DNA test on 2 dogs I adopted. After a great deal of research on the Internet, I found articles written by journalists who did DNA tests on their own dog by several different companies. Results came back different from each company on the same dog. That was enough to convince me DNA tests are not worth the money.

Also watch for the plants in the comments that they spark right up and answer to.

Chicago Pit Breeder Pat Podianowski let's the "Cat out of the bag" on baiting back in 1974:


Love Pat's last comments about taking home a losing Pit and killing it...