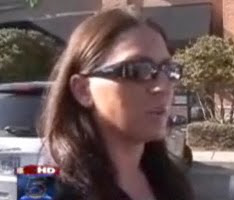 Randy Travis has quite the nose for news. recall that he blew the lid off of jere alexander's dirty little secrets a little over a year ago. now randy has uncovered a new scandal, PIT PRINTS pit rescue and rehabilitation run by con artist AMANDA CONRAD. it seems that amanda misrepresents dogs to her donors and misrepresents donations to dog rescuers. amanda conrad solicits donations for dogs that are not even in her possession. and she appears to be skimming both cash donations and material donations. the state has suspended her license and is looking into the missing money and missing dogs. her most recent tax returns indicate that she took in $31,000 in donations and 45 dogs. 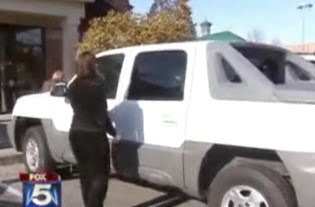 nice sled amanda!
i launched my own little investigation of amanda conrad and she appears to be a carbon copy of another infamous pit grifter, KRIS CRAWFORD.
KRIS CRAWFORD played on the generosity and sympathy of others by claiming to have stage 5 cancer with only 6 months to live. in may 2006 at the age of 25, AMANDA CONRAD sent out an urgent alert all over the piternet also claiming to have cancer and in dire need of unloading her rescued pits while she completes treatment. but something tells, it was all a scam.
more scuttlebutt
the commenters over at the charlotte dog examiner had a field day ripping on amanda last year. amanda was accused of having ties to dog fighting and having dogs that have attacked fellow pit nutters. AntiPitPrints! says:
"ADOPTING UNNEUTERED MALES to very suspicious people and being LINKED to dog fighting. I found out about her after I was attacked by one of her dogs who was covered in scars and tried to report her for dog fighting. I really really hope there is a community push here. I tried to investigate her and she had her lackies threaten me." 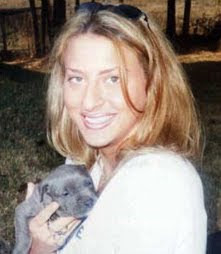 AMANDA CONRAD ON THE WEB
georgia business license
facebook
myspace
littlepetproject here is amanda promoting her org and her frankenmaulers with "sexy and tasteful photos" to show the world that pits are personable and "pit parents are just like other dog owners- hopefully dissipating stereotypes that many have about pit owners."
check list for pit nutter stereotype
• tattoos
• pathological lying
• criminal behavior
• narcissistic
Posted by scurrilous amateur blogger at 3/01/2010

1) No wonder Amanda is scamming so successfully. Pit nutters are so gullible to any lie they're told. This is why so many (and their children) end up attacked by the sweet PB they took into the house.

2) I'd add 'sexually frustrated' to the pit nutter characteristics list. The photos in Amanda's gallery suggest that she's so desperate for for a fuck that she's considering doing it with the PB. 'Hurry guys, before I let my PB just TAKE me, pant, pant!' Meanwhile, the PB looks like the typical man PB-lover -- overweight, ugly and fat-headed. Too fat-headed to realize that with their PB they are advertising their need for a penis-extender. Might as well write 'it's too small' on their foreheads.

I suspect Amanda is stuck in a vicious circle...

I am completely grossed out by the images of this freak in lingerie rolling around on the floor with a dog.

I suspect most "rescues" are run this way. I think most of them devolve from hoarding.

Did you see the conditions of the "rehabilitation center" Survivor went to? If that dog isn't STILL being used for dogfighting I'll eat my border collie.

You just can't make this stuff up.

After the photo (and you'll know exactly which one I'm talking about once you see it), be sure to read through all of the captions below.

She happily let me stroke her muzzle, and I marveled at the beauty of her soft skin and Pittie lips made for kissing your cheek.

You really just can't make this stuff up.

Yep, another case of PItiopathy.

And a whole lot of eeewwww!

And there are more!


Many of these "pit bull rescues" are fronts for dog dealers. They are selling dogs, with the added bonus of using sypmathy to fleece people out of donations.

They aren't reporting income, some are selling directly for the dog fighters.

Some of these dealers are doing business on Petfinder.

We need undercover work to go after these thieves.

They have no permits, they are breaking all kinds of laws, including tax laws, there's animal abuse

"Some of these dealers are doing business on Petfinder."

Betsy Saul, who doesn't own Petfinder.com any more (with her MD husband Jared) but sold it for millions to the Discovery networks, is stark ravers

She still has some kind of management role at Petfinder

She actually had one of her friends handle the Petfinder forums, where they let these pit bull women post pictures of their chained, unneutered pit bulls, and ask for money, and let AKC crazies post pit bull propaganda. Also Nathan Winograd cultists promoting Winograd's business.

They threw anyone off the board who complained about these breeders as well as the obvious abuse getting posted.

Saul is another one who has sainted herself for "helping animals" but is profiting off promulgating animal abuse.

I suspect that she is friends with the crazy woman running Animal Planet (owned by Discovery) and it is Saul who encouraged these pit bull shows.

All it took to rope in Betsy Saul was to have some breeders tell her about "pit bull genocide" and "racism."

i was just looking for part 2. THANK YOU!

Wait a minute....The first Nutter in PT 2 is claiming she rehomed her Pit due to fears of the animal's red zone dog aggression. I thought it was perfectly manageable and humans were in no danger from it?!?