another case of car aggression 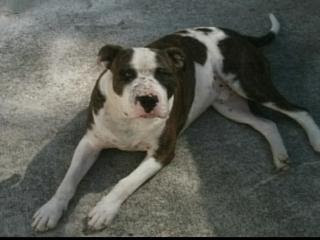 WINSTON
on sunday, winston and his two unidentified accomplices somehow managed to break free from the drudgery of their 42/7 jobs of guard dogs at mann welding company in chattanooga. winston attacked a police cruiser. the cop was inside checking radar when his car began shaking. he got out of his car and saw winston attacking his car. the cop tried pepper spray, then a stun gun but it didn't stop winston, he just rolled over and pulled the prongs out of his skin and resumed his attack. (he should have tried Rinalia's choking off method!) by the time backup arrived, the frankenmauler chewed the front bumper completely off, bit through two tires, and left teeth marks in the side panel of the cruiser. winston also attacked two other cars before he was apprehended.

"Obviously at some point yesterday he was not a nice dog," said MICHAEL EMERLING, "but previous to that he was very sweet." emerling says winston has exhibited aggression toward lawn equipment, but has never hurt anyone. but after seeing what the dog could do to a car, emerling says he can't take the risk. the police MICHAEL EMERLING said Emerling, "I wasn't prepared for what I saw." "We can't take the chance that the next time something sets him off it won't be a car," said Emerling, "if it were a person -- we just can't take that risk."

winston and his two buddies are being held at the animal shelter and the pit nutter, NANCY M EMERLING has been cited.

UPDATE 1
the frankenmauler is now being reported as a pit bull/boxer mix and the damage done to TWO police cruisers is > $3000. that is not counting the damage of the two other cars that are owned by private citizens.

a couple of quotes from Karen Walsh, executive director of the McKamey Animal Shelter

"Some dogs are very aggressive. Especially when they feel they are being protective. So I think the officer to the dog's perception was in his territory and so the dog just attacked the car." can you say, 'pit nutter'?

"It's just wonderful that nobody got hurt. Because when a dog gets this incensed, anybody who gets in the way could be injured."


the owner is now saying that winston was stray that they took in and they are speculating that the radar or the strobing blue lights set off winston :) 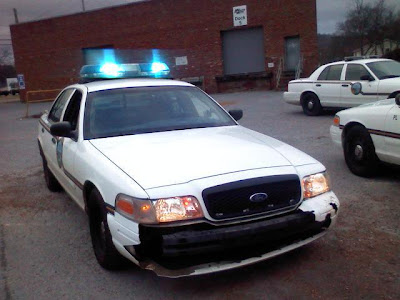 Must have been Smallwood line Pits...The taxpayer gets bitten in the azz here!

People care more about cars than they care about children.

What OTHER dog destroys cars?!?!

The shelters are so full of pits that directors are on this line of thought just to move them out. They don't care if the pits are inappropriate for adoption, just save those numbers. Thank the Whino for these attitudes.

Tennesee LEO's seem to forget that the Pits who killed Jennifer Lowe did this same thing 2 months prior to her mauling....Blue Needle please..

yeah that is a horrible "accident" waiting to happen. WTF who cares if there was no aggression at the shelter... there was major aggression prior to the shelter. The cop should have shot the dog!