Patty Khuly is at it again

The name Khuly is derived from ancient Aramaic and, depending on usage, means either "the village idiot" or "a copious amount of dung." Ex: Watch where you step, Patty Khuly just spewed khuly all over the place in her most recent blog post on fake service dogs. 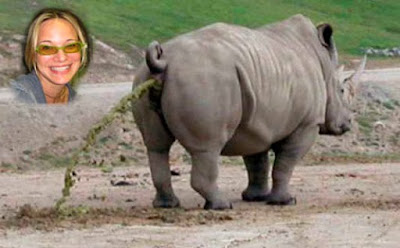 Khuly has a veterinary practice which serves an exclusive clientele of amoral lying nincompoops. We know this because she spends a lot of time blogging and in virtually every post she includes an experience she recently had with one of her clients lying or being a nincompoop.

Last year, Khuly wrote about her plan to call her illegal pit bull mix a service dog to circumvent the Miami-Dade pit bull ban. In the original post she writes very clearly and precisely that yes she will call her pit a service dog, but when she found herself struck by a shit storm of angry emails in which khuly rained down hard upon her, she first blamed her critics for putting the illegal pit bull's life in jeopardy, and then deftly used the classic 5th grade retort, "I was only joking."

She decided to leave the topic alone because "though I believe it worthy of continued discussion, and the issue undoubtedly deserves a higher profile as a trend that must be addressed, the fact remains: once insulted, any given community can be really, really unforgiving...despite any well-meaning clarifications."

See what she did there? She shifted the blame from her outrageous, illegal proposition to the supposedly inflexible reactions of service dog owners. I do not know how this woman got a degree; there is only so much blame you can lay at the feet of your fetal pig before you just start to look silly.

Despite swearing off further posting on the fake service dog issue, compelling reasons have brought her back. First, she saw other people doing exactly what she threatened to do in her blog: pass their dog off as a service dog. And, second, she happened across one of the hundreds of articles condemning the same issue.

The gist of her new article is that the growing problem of service dog scamming is a sign that pet owners are not willing to accept the status quo and they are fighting back. Since we want to take our dogs everywhere, we obviously should be allowed to do so without being forced to break the law. Pet owners should not and will no longer stand for "dogless dining," being relegated to "the smallest parks and the crummiest beaches," and being "regarded as pariahs by the transportation industry." Oh, and then she slips pit bull bans or as she calls it, "right to death legislation" as one of the justifications for "revolting."

See what she did there? She came back and said she was justified for calling her pit bull a service dog - she is just one of the many who are lifting up their voices and saying "we're not going to take it anymore" by going out and breaking the law.

Don't be fooled by the last sentence in which she suddenly distinguishes people who are "revolting" against unfair laws from the "ethically challenged" and "just plain ignorant" service dog scammers. The only revolt she mentions in the article is service dog scamming.

Khuly will always be Khuly! 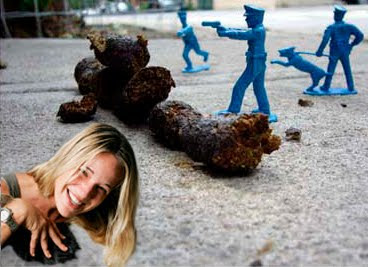 apparently morals and critical thinking skills are not a prerequisites to earning college degrees.

proof that just anyone can earn an DVM degree. and the standards for vet techs are even lower.

It is against the law to rob banks or to commit murder, but banks are robbed from time to time, unfortuante people are murdered. We do not change laws to suit the convenience of bank robbers or murderers. How is this any different? Do not attempt to justify breaking the law by stating that you are doing it because the law does not suit your fancy.

Exactly april29, she is constantly shifting blame and making exuses.

And can you imagine letting pets everywhere. This woman still does not seem to comprehend the difference in training and reliability between a service dog and a pet.

These pit owners are deluded if they think they're going to get away with claiming pit bulls as service dogs in the long run. The first couple of incidents of a bad mauling in public under this ruse, and you'll see a ban on what kind of dog can be certified as a service dog. They ought to do that already, because most breeds aren't suited to this task for various reasons. I'm glad the States at least put a stop to people being able to take service animals into restricted areas for supposedly psychological benefits. They also banned many types of animals as service animals altogether, so there's already legal precedent for the regulation.

Having dogs on public beaches and in restaurants is a health risk for contracting parasites and for people with allergies, and that's not even touching the issue of aggression with fighting breeds.

Criminal logic is a feature of pitthetic dementia...

Criminal logic provides justifications to break any law, or to justify any action regardless of legal statutes and their moral basis.

Criminal logic is actually a misnomer and oxymoron. There is no logic in criminal logic; it's merely a self deluding methodology to contrive justifications for putting oneself above the law, above others, and abandoning moral responsibility.

While there is a clear correlation between stupid people and criminal logic, this is not an absolute. There are many self deluded academic achievers who fail at moral judgement, empathy and logic. Acute narcissism is a frequent obstruction to rational regard for the law, as is psychopathy and pitthetic dementia. Whatever the case, Khuly demonstrates that she is dishonest and should not be trusted in any capacity. Khuly demonstrates she is perfectly willing to lie when it suits her.

Pit nutters never keep their word. On my blog, I can't tell you how many times a nutter has said they would never come back, but they always do.

As for pets in public places, Supervisor Don Knabe in Los Angeles County issued a press release in 08 about children in a day care center being taken to the hospital and many being ill because of free roaming cats, a feral cat colony close to the day care center. Last year in Miami, beachgoers came down with hookworms traced to a feral cat colony. Lindsey is correct that many people have allergies and it can actually be life threatening to some to come into contact with dogs or cats.

Hygiene is a big issue as Lindsay and Honesty say. Service dogs of Florida suggests that dirty service dogs may be refused.

People in Washington DC are not happy about having to share mass transit with the "service" pit bull.

Disclaimer** I am not making this up!

BTW...While typing my last post I designated every dog in my neighborhood as a Service Dog...

Meanwhile, here are 271 reasons why communities opt out of the Pit Breed Stewardship crazy train:

Wow, the link to the guy with the PTSD pit is crazy. He describes the attack and defends the breed in the same breath.