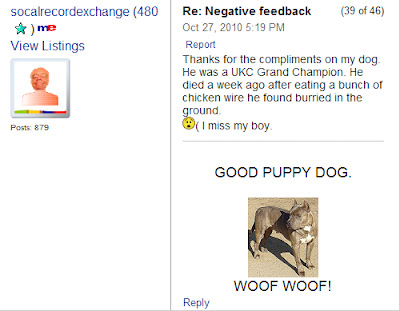 That's what happens when a game bred dog becomes frustrated by a lack of mauling opportunity.

AKC conducted a survey of dog trainers on the smartest breeds and Pits didn't fair well. At least this one darwined itself instead of the police offing it while it was mauling something.

I know what I'm planting under the fence adjoining the neighbor's pits now!

There is nothing on earth as pitiful as the poor slobs who spout this "UKC Grand champion" and "AKC Grand Champion" bullshit.

All meaningless, all of it.

They are getting screwed by paper peddlers.

It would be nice if they produced a dog smart enough to discern that the grandmother taking her trash out didn't need to be mauled.

Does anyone have an Ebay id they can post to let these fucking idiots know about dogsbite or something so maybe they can think about the kids these dogs are killing?

What crap does this POS sell?

@Dough
Great another sociopath. Just when I thought the last of them posted on this blog I was proven wrong. Now for puppy mills, they lie about the dogs being from champion lines just to get extra money. A responsible breeder will occasionally breed their dogs while backyard breeders and puppy mill runner will breed their dogs every chance they get. Try reading about responsible breeders or maybe even talk to one. Well the last part was probably useless considering you’re all going to just call me a bipolar, Pit Bull nutter confused teenager who needs to experience the real world. Dogs are like children meaning they will put anything in their mouth and most of those things can be very dangerous.

You are a very sick person and should go to jail for the rest of your life. If you have children or are married I pity the people who have to live with you. That’s animal cruelty and no matter what breed or animal it will not be tolerated. Trying to kill your neighbor’s dogs just because they’re Pit Bulls? You just a worthless coward who can only hurt animals. I bet if the owner caught you trying to kill their dogs you tuck you’d tail just like the yellow bellied mongrel you are. All of you are no better than Michael Vick; cowards who only hurt animals for money and because they want to mask that they are afraid of them and more so afraid of then owners. So you hid behind your computers trying to act like you care about people and that you want to help people but all you really are, are just sociopath that deserve to be locked up in jail with all the other mongrels of today’s society. You’re just like the vicious dogs you talk about all the time, untrustworthy, worthless, untreatable, useless and not worthy of even being alive.

Well the theories me my three best friends and my teacher were right; this site caters to those who display sociopathic behavior. Trying to kill a dog with chicken wire because of it’s breed is not only criminal but it is also sick. I should have known earlier what kind of people I was dealing with. You do know that Jeffery Dahmer started out the same way? He would torture and kill animals but then he decided that killing humans was more of a thrill so he began to kill humans. My teacher’s husband works for the BAU and she told me he deals with things like you everyday. People who like to kill animals just because of what they look like. It wouldn’t surprise me if all three of you are really serial killers, you certainly fit several profiles according to my teacher. She told me that most animal abusers are also sexual predators that like t prey on children and women just for the feeling of power and even their ego. Soon just killing animals won’t give them that thrill so they move to humans. You all talk about Pit Bull attacks on the news but when all three of you are on the news what is the headline going to be? Snack sized dog your implies the hidden use of small in the name meaning you would probably be a pedophile who likes to rape and molest small children. Dough I’m not sure with you but you might be the type of rapist who rapes women and young girls that make you angry. Last but not least cravendesires. I’m not sure about you but you might find a place somewhere between the sexual sadist/pedophile category. But from what I have read and watched all of you fall into the categories listed along with several more. That’s really scary if you ask me.

you have quite an imagination little girl.

Little girl, what is wrong with planting chicken wire in my own yard where my dogs won't get at it, and where the neighbors' maulers would only get to it if they dig under my fence?
The only thing that can possibly get killed is an insane pit bull digging under my fence that chooses to eat the chicken wire.

You can always wither move or place something non lethal under your face to repeal your neighbors dogs. My mother did the same thing to keep the neighbor’s Huskies from trying to get our Chihuahua. As to where my imagination comes from one of the girls that use to go to school with me is a sociopath. She killed the class hamster by poisoning it and after we purchased another one she gouged it’s left eye out. Sadly this critter had pets and the last I heard my friend told me one of their dogs died after some brick fell off of the roof and onto the dog. Thing is that roof never had bricks on it and what’s more disturbing my friend over heard this girl asking her father if she could buy some bricks to make a dog house for her dog. Why would anyone try to build and dog house on their roof for their dog? What really happened to that dog? I guess I will never know what really happened all I know is that girl was clearly disturbed not just by her actions but by the things she said. She could always talk gutting animals, stabbing animals, animals being hit by cars, animals being set on fire disturbed stuff like that. Yet her parents just said that was her form of humor or just trying to be scary. Oh they nailed scary alright most of the people at school would get within fifty feet of her if they could help it. Now as to Snack sized dog’s right to protect their property of course you have that right to protect your dogs from your neighbors dogs given that they are actually dangerous. What has me on edge is that it sounds more like you’re hoping one of the dogs will eat the chicken wire rather than use it to protect your dogs. I have two Min Pins that me and my parents have to constantly supervise just so they won’t eat anything harmful of them. One of them has gotten since a few times from eating things;

He ate the head of a plastic hedgehog

He ate a shoelace

He has eaten sand(or rather grazed on it)

He has eaten cat litter

He has eaten at least one of my plastic horses

He ate a prostate pill(luck for him it was herbal)

He has eaten some of the leather off of a briefcase
My Min Pin’s aren’t aggressive or insane or anything like that, unless you try to pick up the one I mentioned while he napping or if he has a rib bone. Plus they love people and love animals, cat and dogs, they’ve never been up close to dogs before but they have smelled my hands after patting the occasional horse of two. Also yes my dogs have been around Pit Bulls, three Rottweilers, a Jack Russell Terriers (a dog that has a reputation of killing small size dogs, puppies, cats and kittens) and a very other large sized dogs of mixed origins. Have any of these dogs played rough with my dogs? Nope not once not even the Jack Russell terriers, the dogs would bound and jump up and wag their tails or roll over on their backs and let my dogs jump on then and just lounge across them. This isn’t from my imagination either.

But he hasn't eaten chicken wire and never would. He wouldn't even chew on it sweetie. Just think for a moment, eating chicken wire...no normal dog will do that.

Any pit bull crazy and stupid enough to eat chicken wire in an attempt to get to my dogs has no business in my neighborhood. Any owner negligent enough not supervise their dogs and let them dig into my yard, deserves to lose their dogs.

So I and the 27,000 other gardeners that regularly use chicken wire to keep their own dogs from digging out their garden will continue to do so and idiot dog owners better be responsible for their dogs or they will lose them.

Get it yet sweetie?