This is Leroy's Story 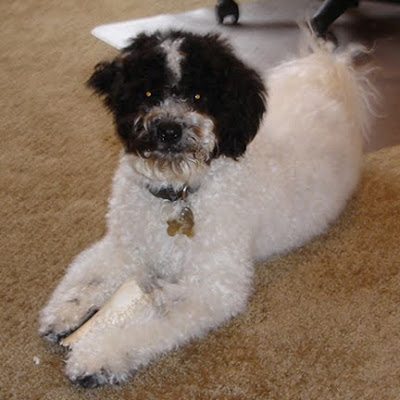 Leroy Tyrone Brown
On October 21, 2010, my 2 year old Bichon-Poodle, Leroy Tyrone Brown was attacked in my driveway by 2 un-leashed pit bulls. He is a Gabriel’s Angels Pet Therapy Dog volunteer, which is an organization that uses pet therapy services to help children who have been victims of abuse and neglect. He has been a member of my family for the past 2 years. 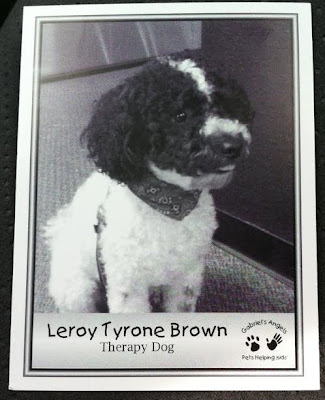 I was told that the dogs were picked up by Maricopa County Animal Control and released to their owners and was shocked! How could they have just let those dogs go? How can the owners NOT have to take responsibility for this? I was even more shocked to learn that currently, there are no laws in the state of Arizona that can hold an owner civilly or criminally liable because there is no current law or ordinance to hold a dog’s owner accountable for “dog on dog attacks. Right now, dogs and cats in Arizona are considered property, which means there are no repercussions for dog-on-dog attacks except for a leash-law violation for the dog's owner which is only a $250 fine. Leroy’s medical bills are already over $7000 and he may need more surgeries in the future and is still in the hospital.
BUT- there is hope! I found out about a new legislation being introduced for a “Vicious Dog Owner Responsibility Law,” by a Glendale couple who tragically lost their dog Fabian, to an un-leashed Pit bull attack in September of 2009. Since Fabian’s death, more than 600 “dog on dog,” attacks have been reported. We must do something to protect our loved ones in the future and getting “Fabians Law” to pass is the best hope pet owners have right now. Please show your support and visit fabianslaw.com for more information on how you can help or visit care2.com to sign the petition for a law that would enforce strict penalties for “dog on dog attacks”, and give rights to victims, pet owners. It doesn’t matter what state you live in- you can still sign the petition and every signature counts right now, especially with the November elections right around the corner! I can only imagine what would have happened had the dogs attacked a child instead of my Leroy. An attack is an attack and until people who own vicious dogs are held accountable, deaths such as Fabian’s will be in vain.
An additional update: I just learned that another dog was attacked by the same pit bulls earlier that morning. Sahara, a toy poodle, did not survive. Her owner rushed her to the vet, and then returned to look for the 2 dogs. He found them wandering our neighborhood and called 911 and Animal Control. For almost 2 hours he followed the dogs taking pictures and repeatedly calling Animal Control back who told him to go home, he had already reported it and they were coming. Hours later, Leroy was attacked in my driveway when my roommate stepped out to take him for a walk. According to the report, the owner of the dogs positively identified them, had no licensing information for her dogs, and received 4 citations and her dogs back on the spot. They were never even impounded by Animal Control. Anyone you can share this story with and tell them about Fabian's Law and the petition would be so appreciated.
*WARNING* graphic images 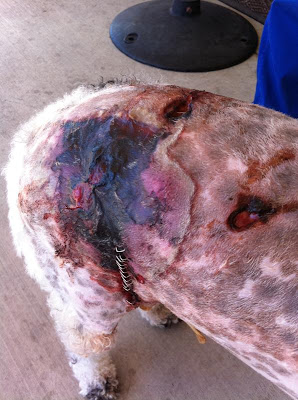 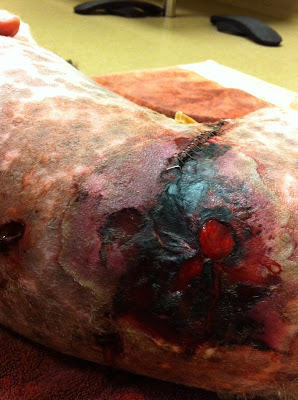 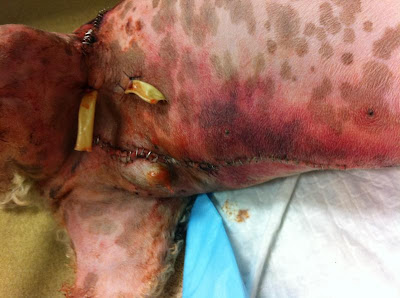 Thank you Craven Desires for continuing to fearlessly advocate on behalf of the innocent animals who are mauled, maimed and killed by dangerous dogs -- primarily pit bull type dogs.

You are MEGA star status!

Ungodly, absolutely ungodly is all I can say.

Yes, I have signed the petition and beg all of you to do the same.

My dogs were attacked by a rescued x-fighter pitbull who busted out of a 6 ft privacy fence with absolutely NO WARNING!!! I was simply walking my dogs innocently on leash in my own neighborhood as I did the other 365 days of the year.

Let me just reiterate - the shit bull busted through a 6 ft wood privacy wall fence like it was a paper bag, and the next thing I knew my chow was up in the air and being shaken like a rag doll. I never even saw it coming. There was no time to prepare.

God bless little Leroy for a speedy recovery. He and his owner have been traumatized for life thanks to these selfish assholes.

I've also signed the petition. It's sickening and sad that we should even have to be discussing this. It's such a no-brainer. If you own a vicious dog, you should be held legally and financially accountable for WHATEVER that dog does. If that means jail time or bankruptcy, sucks to be you. Grow a brain cell and find a better dog breed.

Pit bull owners are in the same category as pedophiles and animal abusers. They WANT to own dogs that hurt and kill other animals and children...at some level, I think they welcome the attacks.

Pit bull ownership is a marker for deviant behavior....these people constitute a minority of pet owners, yet they are catered to by our legal system due to the influence of powerful lobbying groups.

Easy enough - I signed the petition. I wonder how many pit bull owners have signed. Aren't they the ones always saying, "Punish the Deed?" Maybe the pit advocate "journalist" over at the Examiner blogs could help get the word out and drum up some signatures, rather than waste time whining about what books Amazon carries. I won't hold my breath, though. I know the difference between hollow slogans and sincerity.

Pit nutters could care less about "punish the deed", it's just an empty meaningless phrase. You know the tiny helpless innocent infant that was killed by the loving family dog? The nutters are upset that it got put down. They believe ALL the blame lies with the parents(a lot does, yes, but the pit bull did the actual killing-something it deserved to be punished/die for).

can you post some links to those nutters complaining about the dirt nap?

“It has been so much pain and sorrow in owning a breed… It's gotten to the point that I'm afraid to take them out with me because of the reaction I get, and it really didn't used to be that bad. The media around here has really affected people's opinion of the breed because I used to be OK with the occasional negative response, but now it is almost all I get”

There it is again - it’s all the medias' fault! Poor her! It’s kind of like being a member of Charlie Manson’s cult when that damn media broke the news of some mass murdering. I mean, c’mon, a few murders and everybody’s gotta go down?! The horror!

Ledy VanKavage and Best Friends Animal Sanctuary say it is OK for pit bulls to do this to your pets!

At Best Friends, the Michael Vick Vicktory pit bulls (which they claim are "rehabilitated") are breaking through wire fencing to kill and decapitate other dogs RIGHT ON THEIR SANCTUARY PREMISES!

Not a sanctuary, is it?

And the owner of Dogster needs to be aware that that site is turning into a dogfighting and dog fighting breeding enablement forum!

Ted Rheingold and the Dogster sleazy suits, letting their site get used by dog fighters, pit bull breeders for dog fighting, and the related mob who advise the public on how to get babies killed, pets killed, and help protect fighting dogs to kill, kill, kill and maim.

Ted Rheingold, you scumbag, you are supporting BABY KILLERS!