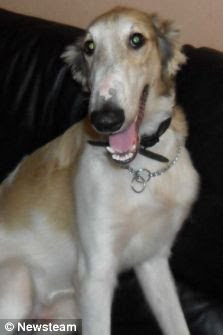 rip Mika
i am finally in a mental state where i can write about this attack without fearing my words will incite others to violence. pit bull home invasions leave me feeling like Charles Whitman.
last wednesday (2.16.11), Sam Thomas lived through Jennifer Lynch's psycho pit bull monster horror film, The Compound. her children were out side in the fenced in backyard playing when they ran into the house to tell their mother that 2 black dogs got into their enclosed yard. the dogs were hot on their trail and forced their way into the house before Sam could secure the door. Sam barricaded her kids in a room. their family dog, a 9 month old borzoi was in crate in the hallway. Sam thought that the crate would protect their puppy. of course, it would have if these were simply marauding german shepherds but then again, i don't recall EVER reading about violent home invasions by german shepherds. this crime is exclusive to gripping dog. it didn't take the hideous mutants long to destroy the crate and attack Mika. Mika screamed as the frankenmaulers mutilated him. this horror show was clearly heard by Sam and her children, who were screaming at their mother to let them help Mika. meanwhile, Sam had called for help. her husband arrived and used a hoe and a metal broom to separate the dogs, both the hoe and the broom were destroyed. the police and special forces from the dog unit arrived and it took four men to get these psychotic monsters under control. one of the special forces officers dislocated his shoulder trying to manage them. Mika was rushed to the vet. Mika died the next day, he had 70 wounds.
the hideous mutants are in custody and the hideous nutter is "cooperating" with the investigation. when Richard Thomas spoke to the teen nutter, he got the typical dog aggression is natural and normal response. let's hope that the police don't give the typical response of "sorry mate, dog on dog attacks are not in my job description".
THIS is why i focus this blog on animal aggression and the idiots who think this obscene prey drive is acceptable and manageable.
'He told my husband that the only crime was that his dogs did not like other dogs.' Sam Thomas 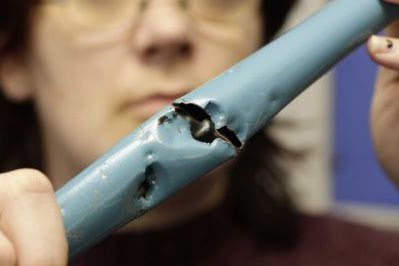 of course, the deranged pit nutters in the comment section rise to occasion, or rather sink to the occasion. how about this insensitive remark from the demographic that has perfected "crate & rotate".

Have I posted yet to day how much I hate pit nutters?

The people that own these dogs are the real sociopaths or, like princess, they are so stupid they need to be managed by trained professionals or they are so "open minded" their brains have fallen out.

hey i like that !! so open minded their brains have fallen out. thats a no brainer and a keeper.

this case goes to show again the need to take responsibility for your own safety. how great an outcome to hear those two mutantmualers had been blasted to hell if it were only true!

Very few of the comments, even those decrying the attack make note of the absolutely abnormal, barbaric quality of these marauding monsters invading a home to fulfill their delight in attacking people and animals. These are execrable, mostrous freaks that have no reason for existing at all.

And the owners who think its a matter of "they dont like dogs" are maggots.

Reading this story left me trembling with rage. I had to go back and watch the mule video to calm down.

This makes my blood boil. If that had been my home, I would have seen to it that those mutants choked to death on their own blood.

I'm with you about being angry, but I love the mule video quip...nicely played. I think I'll go watch it now too. I've played it several times for male friends and family and they all like it. Common responses "good, dog deserved it", "that dog is insane", "i need a guard mule", etc.

Anyone who can't sling around at least 80 lbs with their upper body has no hope against a pit bull, unless they are armed with a gun or knife.

80 lbs is no problem for me, but I still wouldn't want to face a pit bull unarmed. A good sharp knife is a must - if not a gun (or a pet mule)

A loose pit bull is a deadly pit bull.

There needs to be a logo for the mule I say! A great mascot and tool for fighting off these nutters and their pits. Almost everyone should have a backyard mule. :)

I wish there were one to kick those "black dogs" into another dimension of pain.

I was one of the 640 folks who gave Susannah, the hateful, victim blaming nutter a thumbs down. Her comment is shameless. Crate and rotate is standard operating proceedure in any multi pit household.
A few years ago, after another outrageous attack (seems like it was possibly in Texas.) A couple pit bulls owned by a professional athlete got loose and attacked a puppy being walked by a family on their way to putting the children on the school bus. The mother rushed her children to safety as the little dog was torn apart. In the comments, nutters were all over the small dog owner for not protecting her pet. A very sad comment came from another mother who made the same choice. A pit bull rushed into her home and went after the children. This mom said "I threw my Cocker Spaniel into the room. While the pit bull was busy killing her, I rushed my children to safety." Further comments from this poor woman made it VERY clear that she never got over sacrificing her pet to save her children. Her anguish touched my soul, I can't forget her.
What is wrong with nutters? None of this makes sense, none of it is honorable or humane.

And that shit-for-brains, pit bull lovin' "Princess" character doesn't understand why we find solace in the rare stories of people fighting back, defending themselves, their children and pets?

Imagine the horror of it. Imagine being barricaded in a room with your children as your beloved pet screams in agony throughout its protracted murder. Imagine your anguish as you hear your pet fall silent on the other side of the door. Imagine the minutes that feel like hours as you wait for help to arrive, if you were even able to call for help.

Now imagine this family living in a free society as citizens rather than subjects. Imagine if this mother had access to a weapon and rolled those shit bulls like turds in a flushing toilet. Being of sound mind, I can live with that outcome. But that’s not what happened.

dude, definitely the best comment i've read in quite a while.


anon 12:11, i have been trying to decide how to keep that mule video alive. either a side widget or keep bumping it to the top.


princess profiler, i left you a doozy of a comment in this blog. why haven't you taken the bait?

I'm with those who want an icon or logo for that mule. Now if you'll excuse me, reading this article makes me want to go rewatch the hero mule in action...

As for that Princess person, she's still a teenager, right? I'm really hoping she wises up as she gets older.

What's the excuse now, pit nutters? That innocent victim dog was NOT EVEN OUT IN PUBLIC!

Your fucking (sorry for the swear word but I'm just pissed off) monsters DO NOT HAVE A RIGHT to attack other dogs on those dogs' own properties!

I'm wondering if anyone else has a name for the mule? I like "Mule of Justice".

Love it DubV, "Mule of Justice"... when I say it, I hear that sound from The Good, The Bad, And the Ugly.

Trying to come up with another mule name that gets across the idea of a gentle animal that doesn't look for trouble but will throw down when the time comes. It's a classic motif in movies (grasshopper in Kung Fu), I'm sure there is some permutation of a movie characters name that fills the bill.

thanks for everyone's input. i wish i could put that music clip in there but i don't know how.

Yep, "Justice the Mule" is better than "Mule of Justice". Much more personal. It gives him/her a first name.

i love that but the reality is, for every one mule that i blogged about that mauled a pit, at least two mules were mauled by pits. although, i have never heard of another animal turning the tables on the hideous mutants.

That is true, unfortunately.

"although, i have never heard of another animal turning the tables on the hideous mutants."

Wasn't there a bear that beat up a pit before the nutter owner ran it over with his car? And I've heard a story about an escaped zoo hyena killing two pits, though I'm not sure about the veracity of that story.

Speaking of crates. Check out these heavy duty cages recommended by PBRC

Those children will be traumatized for years to come by this. There are few stronger bonds than between children and their pets. To be forced to listen to that and unable to do a thing to stop it in their OWN home, where they should've been safe, is a recipe for PTSD. I hope the family gets help for them. They're going to need it.

I agree. It is hard to to imagine the enormity of this trauma - dude i bagged your pit's comment does a good job - but those children thought their house was safe. They, like me, don't live believing that nasty beasts can enter with savage, unrelenting, merciless intent to rip, tear, and kill. Those kids have permanently lost the feeling of refuge and safety.

April 29's story is also indescribably devastating. The mother and the children were all severely traumatized by that. And there is no coming back from that. Therapy can help you cope and understand, but it doesn't make it go away.

teenage mutant nutter said: seriously i would like to fuck him up. well that why we use words like nutter to describe someone you cant reason with, someone who has no shame and someone who can only see something from their own point of view......thats why we despise you human pitbulls more than your f.ing dogs.

I´m so sorry fore your loss.
Jusr remember - we are in our right to hate those mutant!