the era of ridiculous laws needs to end now 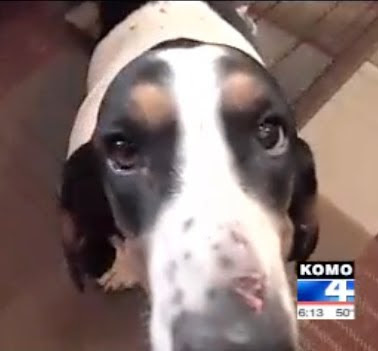 freckles was sitting in the front seat of the vehicle with her owner when a pit bull launched itself through the open window and attempted to drag her out. freckles' owner, bob mcdonald, tried hitting the pit bull but it wouldn't let go. a good samaritan showed up and began hitting the pit bull until it let go but the pit came back. mcdonald kicked the pit bull in the jaw and it ran away. he heard that someone took it to the southwest humane society (oh look, another pit bull only service), so mcdonald went over to identify it and let them know how vicious it was. he didn't get past the front door. mcdonald reported the attack to the police and animal control but he said they aren't interested.
KATE GOUDSCHAAL wouldn't allow the victim to identify the pit bull and wouldn't allow KOMO news to shoot any video citing the frankenmauler's rights. "it would hurt her adoptability – and the dog could be innocent." and "It's really hard to tell what's really truthful in this situation and what's not." 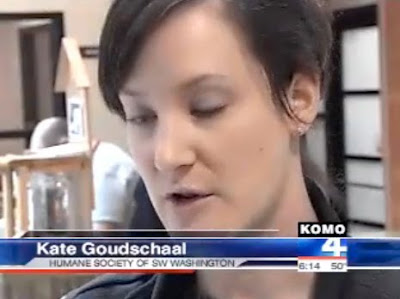 KATE GOUDSCHAAL appearing a little intoxicated by the koolaid.
Posted by scurrilous amateur blogger at 2/21/2010

Why is the victim made out to be the villian? "Hurt the adoptability" of this vile dog? Has anyone explained the liability issue to the airheaded Ms. Goudschaal? Why does the pit bull have rights and the victim has none? Why is the victim's story questioned? He has made a report, he has witnesses, he has vet bills. These questions should be answered.

He needs to go get a lawyer.

Another A/C worker who has become a handmaiden for the Pit Breeders and Dog Fighters....

Yet again we see the utter indifference of shelters and 'humane societies' to all dogs' lives except pit bull lives.

If the owner comes forward...the HS should press charges on the owner for not properly containing his dog. They shouldn't state that they're going to adopt out the dog so fast without doing a proper eval. of the dog.

My opinion....they should euthanize and press charges. Obviously the owner doesn't care because the dog was loose or 'somehow' got out of its confinement.

The problem is that Goudschall is taking the law into her own hands and she is committing a crime.

A young girl like this, working on behalf of dog fighters and breeders, has NO BUSINESS being in this job. She is hiding evidence.

This shelter is carrying her as a liability, and she has come out with a public statement that they are doing dangerous things. They WILL be sued.

Criminal activity is occurring on their premises and they will bear the responsibility.

But I believe that this is in King County isn't is, where Nathan Winograd has enlisted a den of crooks to do his illegal bidding, and protect pit bulls for his pit bull breeding patrons.

I wonder what kind of dog she has and why didn't the reporter ask her?

this is in vancouver washington near the oregon state line. click on the southwest humane society link and you will see the connection to animal farm foundation and pacific northwest pit bull rescue.

I couldn't believe this when I read it!! I do hope this person follows thru with a police report or solicits his vet to intervene, something. This takes the cake, and smears it in all of our faces.

"It's really hard to tell what's really truthful in this situation and what's not," said spokesperson Goudschaal. "...With dog-to-dog aggression, that's workable. Some breeds just genetically don't prefer being around other dogs."

She's admitting that pit bulls have a high prey drive.

Well, high prey drive and dog aggression equals dead kids and dead and hurt people when they get caught in the middle of an attack.

So this Goudschaal is admitting in a public way that this shelter is placing dangerous dogs KNOWINGLY.

She has just set them up for a lawsuit and potential criminal charges.

She's also admitted the truth about the FIGHTING DOGS she is promoting, protecting, and selling.

Isn't Animal Farm Foundation in collusion with Winograd? It seems like their names have come up together. Did they sponsor his conventions?

Yes, the dog could be innocent. The fact is we will never know if the victim can not identify it.

Vicious dogs have more rights than violent human offenders. They should have less, much much less. Ridiculous.

The Animal Farm Foundation is nothing more than a pit bull fanciers organization with a grand sounding name.

Ive seen worse injuries with a spay. I mean come on people.