here is TIA, lying not only to her gullible fanbase but to her employer, ANIMAL PLANET.
http://www.youtube.com/watch?v=C3Wdup7z5b4&feature=related
@ :38 "when parole raided our place, they found some stolen items at the house next door. in particular a green motorcycle that belonged to another parolee but they put it on my husband because they considered it a part of our property."
TIA cleverly omits that the house was vacant and the stolen motorcycle was exactly like AJ's wrecked motorcycle which was also at the vacant house next door.
recall the POLICE records:
"Dantice told me he and fellow investigators served a search warrant at the Torres residence in 2009 and found heroin, methamphetamine and evidence of ongoing identity theft. Dantice said they also found two motorcycles in the garage of a vacant house next door: One motorcycle belonged to Aren Jackson and had been wrecked. The second motorcycle was a matching make and model and was stolen from another location in Los Angles County. The investigators concluded Jackson was using the stolen motorcycle to provide parts for his wrecked motorcycle. Another parolee at the residence took responsibility for the methamphetamine and was arrested. Jackson was arrested for the other items."
TIA also cleverly omits the other criminal evidence found on her property, which according to POLICE RECORDS indicate AJ was also arrested for, ie heroin and identity theft.
be sure to watch this video to the end. the jail escort notes that AJ is an escape risk which his mouthpiece attempts to minimize by pointing out that was over 20 years ago when AJ was a mere 17 yr old juvenile delinquent. intelligent people would look at that info and realize that AREN MARCUS JACKSON is a career criminal and has been for at least 25 years.
here is something that part time residents of the old west ranch should be asking the county supervisors:
HOW SAFE IS MY VACATION HOME IF YOU ALLOW TIA AND HER GANG OF FELONS TO MOVE IN? 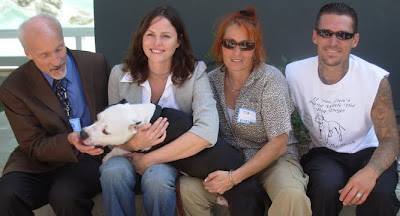 who is this guy on the left?
Posted by scurrilous amateur blogger at 3/08/2011

This is damning evidence. I'd think it would lessen the chances of approval for their move to Tehachapi.

It is entirely possible that she is not lying and she has been duped by AJ.

IF Tia Torres is NOT lying, then she certainly is not qualified to be supervising parolees.

NO KILL INSANITY AND CRUELTY!

I believe the guy on left is ED BOKS, the disgraced former head of LA Animal Control.

This guy was letting animals die in cages and pit bulls kill other pets in cages and shutting down spay neuter programs, and refusing to take animals, in LA shelters all under the guise of this whole NO KILL scam! The usual cruelty while calling it No Kill.

Ed Boks went ahead a few years back before LA fired him and made a private deal with Tia that the city would PAY PAROLEES to clean up dog crap at Tia's, and that taxpayers would pay Tia.

The city got wind of this and shut this insanity down.

P, are you out there? You may have more on this.

Found this. Tia's has already been involved in another deceptive issue with relation to authorities.

"FACT: Bobby states, "Not too long ago Boks even went to bat for Tia Torres of the [Villalobos] pit bull rescue to get a program where she could have used a closed city kennel in connection with people ex cons who wanted to work with the animals.".

The Pit-bull Academy was pitched by Tia Torres and failed by Ed Boks and Linda Barth. The failure occurred when Boks/Barth decided, again, they did not have to follow city protocol. When City Council was made aware that Ed Boks and Linda Barth were creating a program behind their back, giving away city property without the knowledge of city representatives, ignoring union rules, failing to protect the city from liabilities and essentially spending our city's tax payer's money without permission, the program was cancelled. "

They used to promote him endlessly in their No Kill scam until all the abuse that No Kill creates got exposed related to him in LA, and then the nutjobs and Best Friends were pumping that scumbag Nathan Winograd, who now works for the breeders and Rick Berman, getting animals suffering and people hurt.

If there's animal abuse in the name of "rescue," Best Friends is somehow always connected. Same thing with MONEY to be shaken down from the gullible. If Best Friends gets a whiff of people willing to be exploited with emotional lies and stories about animals, and their cash extracted from them, BF are somewhere around looking for the payout.

Money, money, all these scumbags think about is money. They need to hide out in Tehachapi to hide the problems and lies, so they can continue to propagandize and lie, and shake down more money.

That is Ed Boks the ex GM of Los Angeles Animal Services on the left. Tia approached him to start a Pitbull Academy in the animal shelter to partner pitbulls with parolees. Boks started the program without getting any City approvals. He was publicly reprimanded by the entire City Council when they saw the press release for the grand opening. The Council never approved the program because they believed there was too much liability having parolees on City property. Ed Boks was later fired for this mistake and many others.

Does anyone remember the brothel Tia was going to open in Nevada? She was going to peddle pussy to help pits. It burned down.

The house next door was not vacant. It was a part of Tia's property. She let some parolees stay there. They were caught with drugs while her husband was at home. Her husband was arrested because his parole stated there could be no drugs where he was living.

i thought that was ed boks. thanks.

Ed Boks once proposed changing the name of Pits to "New Yorkees" when he ran A/C in NYC. Last year, NYC had 815 "New Yorkee" biting/attack incidents.

pit nutters don't lie, they "willingly participate in a campaign of misinformation". :)

re photo of tia and company with lovable pitbull. what nice people!! o.j., oops sorry i mean a.j., hardly looks a killer. also i hardly believe a nice dog like that can have done anything too bad either. maybe that other man in the suit was there giving tia some kind of award.

HEY SEEING: o.j was innocent and a.j.'s not a real killer. he did the world a favor disposing of that alleged diddler. get real hater!!!!!

The pit bull academy was a great idea.

But it was Ed Boks' stupidity that undermined everything when he failed to get the approval of Personnel, the unions, and City Council, before hiring the parolees.

When City Council bombarded Ed with questions, he looked like a deer in the headlights, as he didn't even know if the parolees would be exempt or non-exempt employees.

Councilman Richard Alarcon goaded Ed into guessing, and Alarcon ripped Ed Boks a new one, saying," If you don't know the answer, Mr. Boks, why are you guessing? Do you understand what we're even talking about here?"

That was the lead up to the final straw for Ed Boks in Los Angeles. the $130,000 sexual harrassment settlement Los Angeles made in response to Ed's behavior, was the end.

Yes, the man on the left in the photo IS Ed Boks. A true loser who lost a $165,000 per year job, with a car, perks galore, a WONDERFUL pension and all sorts of power and influence.

Ed Boks was out of work for more than a year, lost his condo, and is making a THIRD of the money in some po-dunk Arizona shanty town.

When City Council bombarded Ed with questions, he looked like a deer in the headlights,


sounds just like tia at the planning commission meeting when she responded as to why she didn't include all of her plans on the application.

Pit bull academy was a great idea? Hello, how much crack you smokin'

Ed Boks failed because NO KILL is a failure that just kills animals in cruel ways.

And the replacement for Boks is an AKC breeder lobbyist who is trying to eliminate laws so the dog fighters and puppy millers can have a great time proliferating. She's a lying scumbag who is worse than Boks, and only got in there so she could lobby for breeders.

Brenda Barnette is abusing more animals than even Boks, thanks in part to the pit nutters that abuse these dogs while they claim to care about them.

No Kill, the death camp for pets. Brought to you by the AKC, puppy mills, dog fighters, hoarders, and pit bull exploitation rescue scammers and frauds.

No Kill tortures more pit bulls than the dog fighters!

ya all are idiots. tia ommitted because SHE CANT SAY EVERYTHING! i have a fiancee in prison and was put under a gag order while he was on trial. you literally cant say anything! she is saying everything that she can. Please explain to me why in the hell you guys are ragging on a woman who actually gives a shit about pits? there are sooo many animals out there that are homeless hurt, neglected and people hate them just because of their breed. its people like u that make that fear worse. you guys arent human beings you guys r trash. get a life

how convenient.
if she can't say everything, she should say nothing.

we are ragging on a woman who called on her army of gullible bullies to threaten and harass a senior citizen who had the nerve to stand up and say 'not in my neighborhood".

Damn! Anyone else want to jump on the "burn em at the stake" bandwagon? Just because there are croocked politicians in this country, it doesn't mean that everyone with a misspent youth can't be rehabilitated!
This society has a bad case of lookyloo-itis! OMG! Slow down! Is there any blood?! No? Well then, let's make some!
Nobody is given the benefit of the doubt any more. It's all, being guilty before being proved innocent and
not vica versa! What is this country coming to?

what's this country coming to?

oh, i don't know. the pit bull version of the roman coliseum?

Why Would any state or county have to facetiously add charges to an innocent man. Jails are over crowded and bursting at the seams. And why tias husband?

All this has blown my mind. I don't believe any of this about Tia,I hope you can live with yourself when you meet the golden Gates, if your lucky.